The application of self-assembled molecules (SAMs) as a charge selective layer in perovskite solar cells has gained tremendous attention. As a result, highly efficient and stable devices have been released with stand-alone SAMs binding ITO substrates. However, further structural understanding of the effect of SAM in perovskite solar cells (PSCs) is required. Herein, three triphenylamine-based molecules with differently positioned methoxy substituents have been synthesized that can self-assemble onto the metal oxide layers that selectively extract holes. They have been effectively employed in p-i-n PSCs with a power conversion efficiency of up to 20%. We found that the perovskite deposited onto SAMs made by para- and ortho-substituted hole selective contacts provides large grain thin film formation increasing the power conversion efficiencies. Density functional theory predicts that para- and ortho-substituted position SAMs might form a well-ordered structure by improving the SAM’s arrangement and in consequence enhancing its stability on the metal oxide surface. We believe this result will be a benchmark for the design of further SAMs. 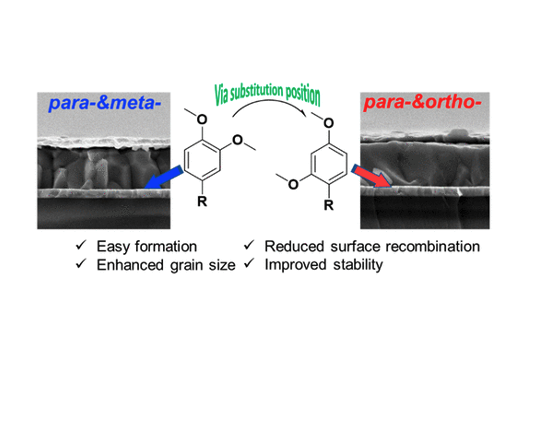