A new Ru oligomer of formula {[RuII(bda-κ-N2O2)(4,4′-bpy)]10(4,4′-bpy)}, 10 (bda is [2,2′-bipyridine]-6,6′-dicarboxylate and 4,4′-bpy is 4,4′-bipyridine), was synthesized and thoroughly characterized with spectroscopic, X-ray, and electrochemical techniques. This oligomer exhibits strong affinity for graphitic materials through CH−π interactions and thus easily anchors on multiwalled carbon nanotubes (CNT), generating the molecular hybrid material 10@CNT. The latter acts as a water oxidation catalyst and converts to a new species, 10′(H2O)2@CNT, during the electrochemical oxygen evolution process involving solvation and ligand reorganization facilitated by the interactions of molecular Ru catalyst and the surface. This heterogeneous system has been shown to be a powerful and robust molecular hybrid anode for electrocatalytic water oxidation into molecular oxygen, achieving current densities in the range of 200 mA/cm2 at pH 7 under an applied potential of 1.45 V vs NHE. The remarkable long-term stability of this hybrid material during turnover is rationalized based on the supramolecular interaction of the catalyst with the graphitic surface. 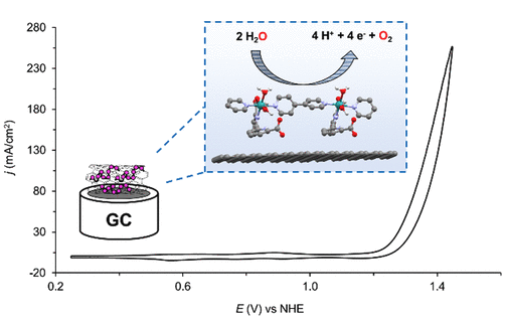