Excitation of photoactive electron donor–acceptor (EDA) complexes is an effective way to generate radicals. Applications in a catalytic regime typically use catalytic donors. Herein, we report that readily available electron-poor tetrachlorophthalimides can act as effective organocatalytic acceptors to trigger the formation of EDA complexes with a variety of radical precursors not amenable to previous catalytic methods. Excitation with visible light generates carbon radicals under mild conditions. The versatility of this EDA complex catalytic platform allowed us to develop mechanistically distinct radical reactions, including in combination with a cobalt-based catalytic system. Quantum yield measurements established that a closed catalytic cycle is operational, which hints at the ability of tetrachlorophthalimides to readily turn over and govern each catalytic cycle. 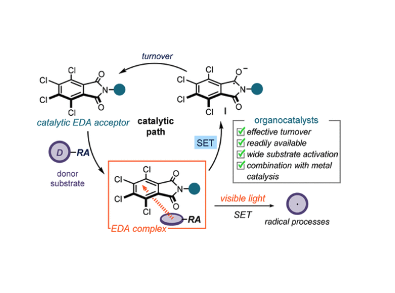