Organic solar cells made using a blend of DPM12 and P3HT are studied. The results show that higher Voc can be obtained when using DPM12 in comparison to the usual mono-substituted PCBM electron acceptor. Moreover, better device performances are also registered when the cells are irradiated with sun-simulated light of 10-50 mW cm-2 intensity. Electrochemical and time-resolved spectroscopic measurements are compared for both devices and a 100-mV shift in the density of states (DOS) is observed for DPM12/P3HT devices with respect to PCBM/P3HT solar cells and slow polaron-recombination dynamics are found for the DPM12/P3HT devices. These observations can be directly correlated with the observed increase in Voc, which is in contrast with previous results that correlated the higher Voc with different ideality factors obtained using dark-diode measurements. The origin for the shift in the DOS can be correlated to the crystallinity of the blend that is influenced by the properties of the included fullerene. 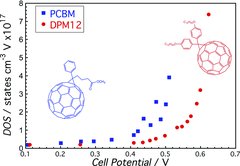