The research on carbon neutral renewable energy sources based upon the combination of solution processing methods, nanostructured semiconductor inorganic materials and optoelectronic device physics is a powerful interdisciplinary platform for scientific research in the 21st Century. Since the group formation in 2006, our particular interest has been the development of earth abundant and molecular based solar cells and the detailed study of the interfacial charge transfer reactions that limit the efficiency on these novel generation of solar cells.

On the other hand, we also are devoted to the development and study of novel materials for biomedical applications that advance on the application of nano-science to medicine.

Our group has focussed on the synthesis and characterization of organic semiconductor molecules that have been used as electron donor in solution processed organic solar cells using the fullerene derivative PCBM-C70 as electron acceptor moiety. Scheme 1 illustrates the synthesis of one of the different set of molecules families that we have synthesised. 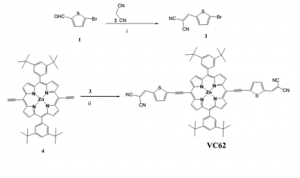 Moreover, we have continued our work on the application of dye sensitized solar cells to building integrate photovoltaics (BIPV) applications in partnership with CEA (France) and Solaronix (Switzerland). The EU funded project allowed the consortium to install the first functional DSSC façade at the EPFL convention centre (Lausanne, Switzerland), as shown in Figure 1. 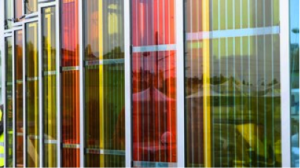 Our group has also started to investigate the use of methyl ammonium lead iodide (MAPI) as semiconductor material in solar cells. The MAPI, when processed either from solution or by high vacuum deposition leads to a solid with perovskite structure; for this reason these novel type of solar cells are known as perovskite solar cells.

The group has focused not only on making the most efficiency devices (12.3% under sun-simulated conditions of 100mW/cm2@ 1.5 AM G) but also to characterize for the first time the interfacial charge transfer recombination reactions that prevent the MAPI perovskite solar cell to reach its maximum theoretical efficiency of 25%. Figure 2 illustrated several current vs voltage curves for MAPI perovskite solar cells and Al2O3 /m-TiO2 modified MAPI solar cells. 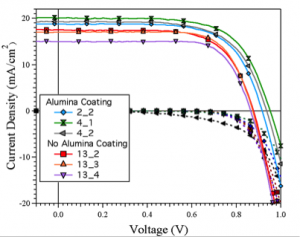 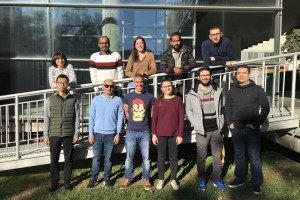