Computational chemistry, in particular DFT and DFT/MM methods, are applied to the study of a variety of chemical processes of practical interest with the goal of understanding reaction mechanisms and applying this knowledge to the design of more efficient processes. The main focus of research is homogeneous catalysis in collaboration with experimental groups.
Studies have been carried out on the proton-transfer  mechanism for palladium-catalyzed arylation, the gold-catalyzed synthesis of conjugated enones, and the organocatalyzed dynamic kinetic resolution of sulfoxides. Topics of supramolecular catalysis have been also studied in the case of a cucurbituryl-catalyzed “click” reaction and the structure of dipalladium anion receptors.. The validity of the computational methods  for the particular problems under study was calibrated by analyzing the quality in the reproduction of the structure of agostic niobium complexes.

Theoretical chemistry has been successfully used as a powerful tool to obtain valuable insight into the mechanism and the origin of selectivity in diferent reactions of high interest. A variety of subjects were studied with the computational tools of density functional theory (DFT) and density functional theorty / molecular mechanics (DFT/MM).

The methods based on DFT provide the most accurate description, and can be used to model bond formation and cleavage, and thus reactivity. The main drawback of DFT methods is that they are very time-consuming, especially when the system under study is big. This problem is overcome using the methods based on molecular mechanics (MM methods). These methods are fast and able to provide a good description of the steric effects that, in most cases, control the selectivity in catalysis. When the system is large and we need to introduce both electronic effects, to model reactivity, and steric effects, to rationalize selectivity, the best deal is often offered by hybrid DFT/MM methods. These methods are applied by dividing the system into two parts, one computed at the DFT level (DFT region) and the other at the MM level (MM region). In the studies of transition metal complexes, the DFT part typically includes the metal and its close surroundings, where the reaction takes place, while most of the bulky ligands are embedded within the MM part.The reaction mechanism is usually disclosed in a preliminary DFT study on the model system, and the origin of the detailed analysis of selectivity is subsequently determined at  the DFT/MM level.

Basic mechanistic aspects of catalysis by transition metal complexes were analyzed at the DFT level in four different cases in joint projects with experimental groups. In collaboration with Prof. Echavarren (ICIQ), the origin of the regioselectivity observed in the intramolecular palladium-catalyzed arylation of substituted bromobenzyldiarylmethanes was explained, and the proton abstraction mechanism previously proposed by our same groups was confirmed. Work with Prof. Nolan (ICIQ) allowed a clarification of the mechanism of  the [(NHC)AuI]-catalyzed (NHC= N-heterocyclic carbene) formation of ?-?-unsaturated carbonyl compounds (enones and enals) from propargylic acetates in presence of water. The mechanism happens to start with the activation of the water molecule by the gold catalyst. The catalytic properties of another NHC complex, in this case with copper, for the diboration of styrene were analyzed in collaboration with the groups of Prof. Perez (Huelva) and Fernandez (Tarragona).

The complexes [Cu (NHC)(NCMe)]BF4 (NHC=N-heterocyclic ligand), with bis(catecholato)diboron (B2(cat)2) as the boron source, efficiently catalyze the diboration of styrene with very high degrees of conversion. With the appropriate NHC ligand, the reaction proceeds quantitatively toward the diborated derivative PhCH (Bcat)-CH2 (Bcat). Our DFT calculations demonstrate that no oxidative addition processes take place at copper, but that intermediates containing coordinated ? bonds are involved in the catalytic cycle. The factors affecting imine coordination in (iminoterpyridine)MX2 (M= Fe, Co, Ni, Zn) complexes potentially active as catalysts in olefin oligomerization were studied in collaboration with the Prof. Solan (Leicester) and Dr. Marechal (Paris). 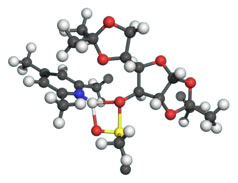 Detailed studies of the origin of selectivity can be carried out only when there is a good general knowledge of the reactions mechanism. This approach was applied to the analysis on the origin of enantioselectivity in an organocatalytic process: the dynamic kinetic resolution of sulfinyl chlorides by addition of the optically active alcohol DAGOH (diacetone d-glucose) in the presence of non-chiral bases. The general mechanism had been clarified in previous years by a preliminary study from our group on the reaction on a model system. The theoretical study on the full experimental system was performed at the DFT/MM ONIOM (Becke3LYP:UFF) level. The dependence of the stereochemical outcome on the nature of the base observed in this reaction was explored considering two electronically similar bases, pyridine and collidine, that are experimentally known to promote opposite diastereoselectivities. Our calculations reproduced the experimental result that the absolute configuration of sulfur in the major reaction product is R with pyridine but S with collidine. The analysis of the optimized geometries (see for instance Figure 1) revealed that the most sterically active substituent around sulfur is the methyl of the substrate with pyridine but the base itself with collidine. This leads to an inversion of the chiral distribution of steric hindrance around sulfur that induces the reversal of the stereochemical outcome. This work was done in collaboration with the experimental group of Prof. Khiar (Sevilla).

Particular aspects of the reactivity of transition metal complexes, although not directly connected to full catalytic cycles, were also studied with a combination of DFT and DFT/MM methods. In this concern, in a work in collaboration with the groups of Prof. Lledos (Bellaterra) and Basallote (Cadiz), the kinetics of reaction of the dihydrogen complex trans-[FeH(?2-H2)(dppe)2]+ with an excess of NEt3 to form cis-[FeH2(dppe)2] were analyzed. The reaction shows a first-order dependence with respect to both the metal complex and the base. The corresponding second-order rate constant only shows minor changes when the solvent is changed from THF to acetone. However, the presence of salts containing the BF4-, PF6-, and BPh4- anions causes larger kinetic changes, the reaction being accelerated by BF4- and PF6- and decelerated in the presence of BPh4-. These results can be interpreted considering that the ion pairs formed by the complex and the anion provide a reaction pathway more efficient than that going through the unpaired metal complex. From the kinetic results in acetone solution, the stability of the ion pairs and the rate constant for their conversion to the reaction products were derived. Our theoretical calculations provided additional information about the reaction mechanism both in the absence and in the presence of anions. In all cases, the reaction occurs with proton transfer from the trans-dihydride to the base through intermediate structures showing Fe-H2…N and Fe-H…H…N dihydrogen bonds, isomerization to the cis product occurring once the proton transfer step has been completed. Optimized geometries for the ion pairs show that the anions are placed close to the H2 ligand. In the case of BPh4-, the bulky phenyls hinder the approach of the base and make the ion pairs unproductive for proton transfer. However, ion pairs with BF4- and PF6- can interact with the base and evolve to the final products, the anion accompanying the proton through the whole proton transfer process, which occurs with an activation barrier lower than for the unpaired metal complex.

Supramolecular chemistry was treated in two examples. DFT methods were used to study a 1,3-dipolar cycloaddition between an azide and an alkyne inside the macrocycle cucurbit[6]uril (Figure 2), in order to elucidate the catalytic function of a highly efficient supramolecular catalyst. Our calculations reproduce the experimental observation that the 1,3-dipolar cycloaddition between an azide and acetylene is a slow reaction in solution with low regioselectivity; and that the addition of the reaction vessel cucurbit[6]uril accelerates the reaction and makes it regiospecific. Analysis of the results shows that the main catalytic effect of CB[6] is the elimination of the entropy cost of  bringing the two reactants together, through the formation of a stable ternary complex between the reactants and CB[6], turning the addition reaction unimolecular 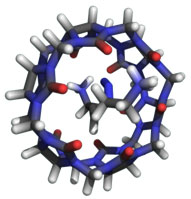 Figure 2. Transition state for the reaction between an azide and propine inside a cucurbit[6]uril  macromolecule

Also in the field of supramolecular chemistry, the binding of a series of di-palladium complexes with thiolato ligands containing urea groups for hydrogen bonding was analyzed with DFT/MM methods in collaboration with the experimental group of Prof. Vilar (London). Three of these complexes were structurally characterised by X-ray crystallography showing some interesting supramolecular interactions between the metal complexes and counter-anions. 31P NMR solution studies had been carried out to gain some insight into the different conformations of the complexes in solution. Our computational studies demonstrated the preference for one of the two conformers in the presence of the appropriate solvent and anion. The anion-binding properties of two of these metalloreceptors were then studied by 1H NMR spectroscopy. Binding constants (in DMSO) between the receptors and specific anions (e.g., [H2PO4]2) are in the order of 103.

Some work was finally invested in the field of methodological calibration. In previous studies of the agostic bonding in TpMe2NbCl(R’CCR’’)(R), we had made use of a hybrid QM/MM protocol (B3LYP:UFF) where the QM partition ([Nb(Cl)(iPr)(HCCH)(NHCH2)3]+) was rather small, but the optimized structures were nevertheless in apparently good agreement with experiment. In attempting to improve this model by expanding the size of the QM region, we were surprised to discover that a full QM treatment of the whole molecule using the B3LYP functional failed to locate an agostic structure of any kind. A systematic assessment of density functionals reveals that the poor performance of B3LYP in these systems is typical of all DFT methods that do not obey the uniform electron gas (UEG) correlation limit. Those that do obey the UEG limit, in contrast, provide an excellent description of the agostic structure when the complete ligand system is treated at the QM level. The apparently good performance of our original (B3LYP:UFF) hybrid method can be traced to a cancellation of errors: the B3LYP functional underestimates the intrinsic strength of the agostic interaction relative to competing Nb-Cl ð bonding, but this is offset by an additional but unphysical electrostatic component to the agostic bond introduced by the presence of a positive charge in the QM region. This work was carried out in collaboration with the experimental group of Prof. Etienne (Toulouse) and the computational group of Prof. McGrady (Glasgow).

Future work will continue some of the topics outlines in 2007. This is for example the case of the analysis of the detailed mechanism for the transition metal-catalyzed C-C bond formation processes. The general topic will continue to be mainly in catalysis, with attention always to colalboration with first-rate experimental groups for the rational development of more efficient catalytic processes. 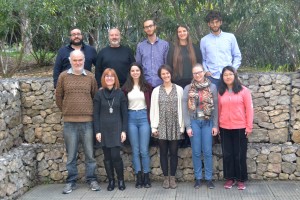