Over the last years, the Pericàs laboratory at ICIQ has been engaged in a broad research program aimed at developing a complete toolkit of polymer-supported and magnetic nanoparticle-immobilized catalysts with optimized characteristics of catalytic activity, high induced stereoselectivity and extended life cycle.

The ultimate goal of this research has been the development of single-pass, catalytic and enantioselective flow versions of the most relevant processes for organic synthesis, contributing in this manner to a more sustainable practice of chemical synthesis. Our laboratory at ICIQ has been pioneer in this effort, being recognized as one of the leaders in the field.

Our main research line involves the preparation of solid-supported species for enantioselective catalysis. In previous years, we have proven the robustness of Brønsted acids, which allowed for prolonged recycling. This prompted us to study the immobilization of the TRIP phosphoric acid catalyst, which was carried out through a copolymerization strategy. The resulting catalytic resin was extremely active in the asymmetric allylboration of aldehydes. Remarkably, the whole aldehyde scope was carried out reusing the same sample of PS-TRIP (18 examples, accumulated TON of 321 in batch), which could be reactivated by acidic washings in case of deactivation. This catalytic resin also allowed implementing a continuous flow experiment spanning 28 h, in which 4.60 g of highly enantioenriched allylboration were produced.

Chiral isothioureas have also been successfully supported in our group. For instance, a peri- and enantioselective [8+2] cycloaddition between chiral ammonium enolates (generated in situ from carboxylic acids) and azaheptafulvenes has recently been reported. The resulting cycloadducts can be derivatized by means of a [4+2] cycloaddition to give bridged-polycyclic products in a regioselective manner. The resin has proven recyclable, allowing to re-use the catalyst for this higher-order cycloaddition. 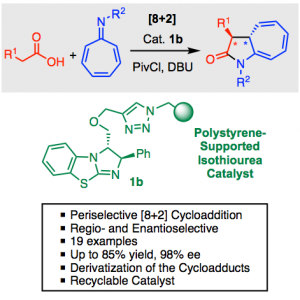 Supported isothioureas have also allowed to implement the catalytic enantioselective formal [4+2] cycloaddition of unsaturated heterocycles with in situ activated arylacetic acids. The annulation strategy described represents an efficient approach to access a series of pyranopyrazolone and pyranothiazolone derivatives, as well as spiropyranopyrazolones bearing a quaternary stereocenter, in excellent yields and stereoselectivities. 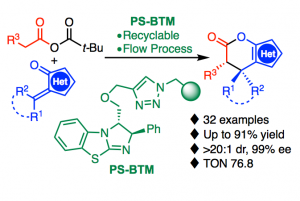 A heterogenized organocatalyst based on Luo’s diamine has been prepared and applied to the fast and asymmetric Robinson annulation reaction. This polystyrene-supported diamine enables the high-yield, highly enantioselective preparation of a wide scope of chiral bicyclic enones under mild conditions, with reaction times as short as 60 minutes (batch) or residence times of 10 minutes (flow). 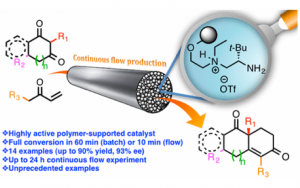 Diarylprolinol derivatives have been immobilized according to different strategies and on different supports (microporous resin vs monolith). The most successful candidate was applied to the enantioselective cyclopropanation between an a,b-unsaturated aldehyde and bromomalonates in flow. Up to 12 analogs were produced with the same sample of catalyst in a period of more than 12 months, which speaks of the great robustness of this catalytic material. 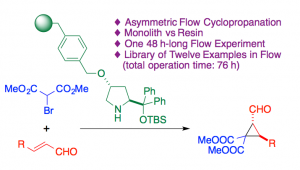 Imidazolidinones are amongst the most successful types of organocatalysts. However, the so-called second generation MacMillan catalyst had never been supported onto a solid phase to fully ascertain their recyclability profile. Thus, we designed a versatile strategy that allowed grafting of these aminocatalysts onto both polystyrene and Fe3O4 magnetic nanoparticles (MNPs). After testing both catalytic materials in the enantioselective conjugate addition of indole derivatives to a,b-unsaturated aldehydes, the polystyrene-based species proved to be superior in terms of activity and stereoselectivity, probably due to some deleterious interaction of the reaction intermediates with the free OH groups on the surface of the MNPs. 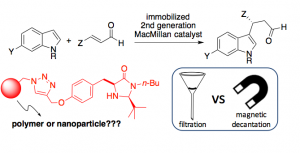 Fig. 6 – Polystyrene or Magnetic Nanoparticles as Support in Enantioselective Organocatalysis? A Case Study in Friedel-Crafts Chemistry.

Now it’s bismuth time! The asymmetric intermolecular α-alkylation of aldehydes with α-bromocarbonyl compounds can be achieved under visible-light irradiation by combining the second-generation MacMillan catalyst and an inexpensive, nontoxic, and commercially available Bi2O3 powder. This reaction also proceeded with high efficiency when the reaction vial was exposed to the morning sunlight in Tarragona.

A methodology for the catalytic asymmetric cross-coupling of two C(sp3)–H bonds employing visible light as an economical and environmentally benign source of energy has been reported. In this protocol, photoredox catalysis is used for the oxidation of a xanthene to the corresponding cation, which is then trapped by an enamine intermediate generated in situ from an aldehyde reactant and a secondary amine organocatalyst. This mild method does not require preinstallation of functional groups and allows the formation of a C–C bond with simultaneous installation of one or two new stereocenters in a highly enantio- and diastereoselective manner.

In the homogeneous domain, we have also reported on the dienamine-mediated [4+2] cyclization of enals and alkylidenepyrazolones, a case of inverse electron demand Diels–Alder reaction. The catalyst screening turned out to be challenging, but finally an unprotected dinaphthylprolinol derived from 4-hydroxyproline was identified, giving rise to 17 different tetrahydropyranopyrazoles in good yields and ee’s.

A diverse family (37 compounds) of cis-4-alkoxydiorganylprolinol derivatives has been prepared and evaluated in organocatalysis for the first time. The combined use of high throughput experimentation (HTE) techniques with efficient analytical methods has led to the identification of two superior catalysts for the enantioselective addition of succinimide to α,β-unsaturated aldehydes. Further optimization of the reaction conditions with design of experiments (DoE) techniques established the catalyst of choice for the considered aza-Michael reaction, the corresponding adducts (12 examples) being obtained in good yields and excellent enantioselectivities (succinimide and maleimide donors). The synthetic versatility of these Michael adducts is illustrated by a two-step sequence leading to enantiopure 1,3-amino alcohols. 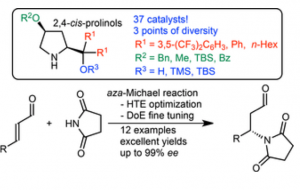 As part of an ongoing collaboration with the group of Prof. Montserrat Gómez in Toulouse, we have studied the use of glycerol as a sustainable reaction medium. In particular, we were intrigued by the copper–catalyzed azide–alkyne cycloaddition in this solvent, which turned out to depend on the source of benzyl azide. We have identified long chain alkyl amine impurities to be responsible for this seemingly random behavior. These “key ingredient” plays a crucial role in the formation of small and well-dispersed Cu(I) nanoparticles, which are ultimately responsible for the catalytic process. Indeed, in the absence of these amines the process does not take place at all, but on the basis of our findings we have established a reproducible and sustainable reaction protocol. 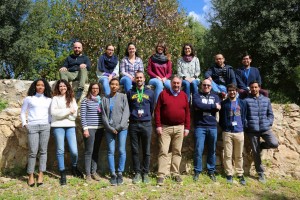