Ruben Martin was born in Barcelona in 1976.

He received his Ph.D in 2003 at the Universitat de Barcelona with Prof. Antoni Riera, working on the total synthesis of glycosidases inhibitors.

In January 2004 he moved to the Max-Planck-Institut für Kohlenforschung as a Humboldt postdoctoral fellow with Prof. Alois Fürstner, where he worked on the application of novel iron catalysts for cross-coupling and Alder-ene type reactions.

In May 2005 he undertook further postdoctoral studies at the Massachusetts Institute of Technology as a MEC postdoctoral fellow with Prof. Stephen L. Buchwald where he developed new synthetic strategies for metal-catalyzed C-C and C-N bond-forming reactions.

In September 2008 he joined the ICIQ as a group leader. His current research interests concern the discovery and development of synthetically useful organometallic methodologies. Rubén Martín was promoted to Associate Professor in July 2013.In october 2013, he became  ICREA (Catalan Institution of Research and Advanced Studies) Research Professor. 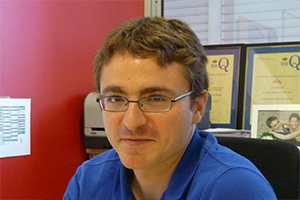