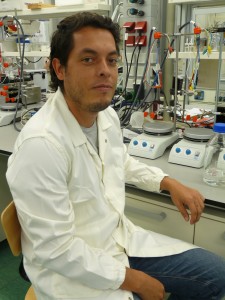 Dr. Felipe Andrés Garcés, postdoctoral researcher in the Galán-Mascarós group, has won the Investiga Award from SusChem-Spain for his publication, “Direct Magnetic Enhancement Of Electrocatalytic Water Oxidation In Alkaline Media.”

The publication described, for the first time, how the presence of an external magnetic field – induced by approaching a neodymium magnet to the electrolyzer – spurred the electrocatalytic activity on the anode, increasing the hydrogen production twice fold.

“I find it very gratifying that SusChem recognises my work. It’s incredible that an entity outside my work environment appreciates and values my contributions,” says Garcés.

As part of the Investiga Award, Garcés will receive €3000 and a subscription to SusChem-Spain and the Asociación Nacional de Químicos e Ingenieros Químicos de España (ANQUE).

The SusChem Jóvenes Investigadores Químicos awards aim to recognize, encourage and promote scientific and informative activity among young chemical researchers, as well as to promote, develop and publicise the discipline of chemistry, both in its pure science aspect and in its applications.

Previous
Congratulations, Dr. Peñuelas-Haro!
Next
Prof. Emilio Palomares named new ICIQ Director
This website uses cookies to facilitate user navigation. You can get more information or change the settings of your browser by clicking here. ACEPTAR