Matteo Balletti, PhD student under the supervision of Prof. Paolo Melchiorre (ICIQ), has defended his PhD thesis entitled “Excitation of organocatalytic intermediates and application in new radical processes” (assigned to the Organic and Analytical Chemistry Department of the Universitat Rovira i Virgili) publicly on October 10th. 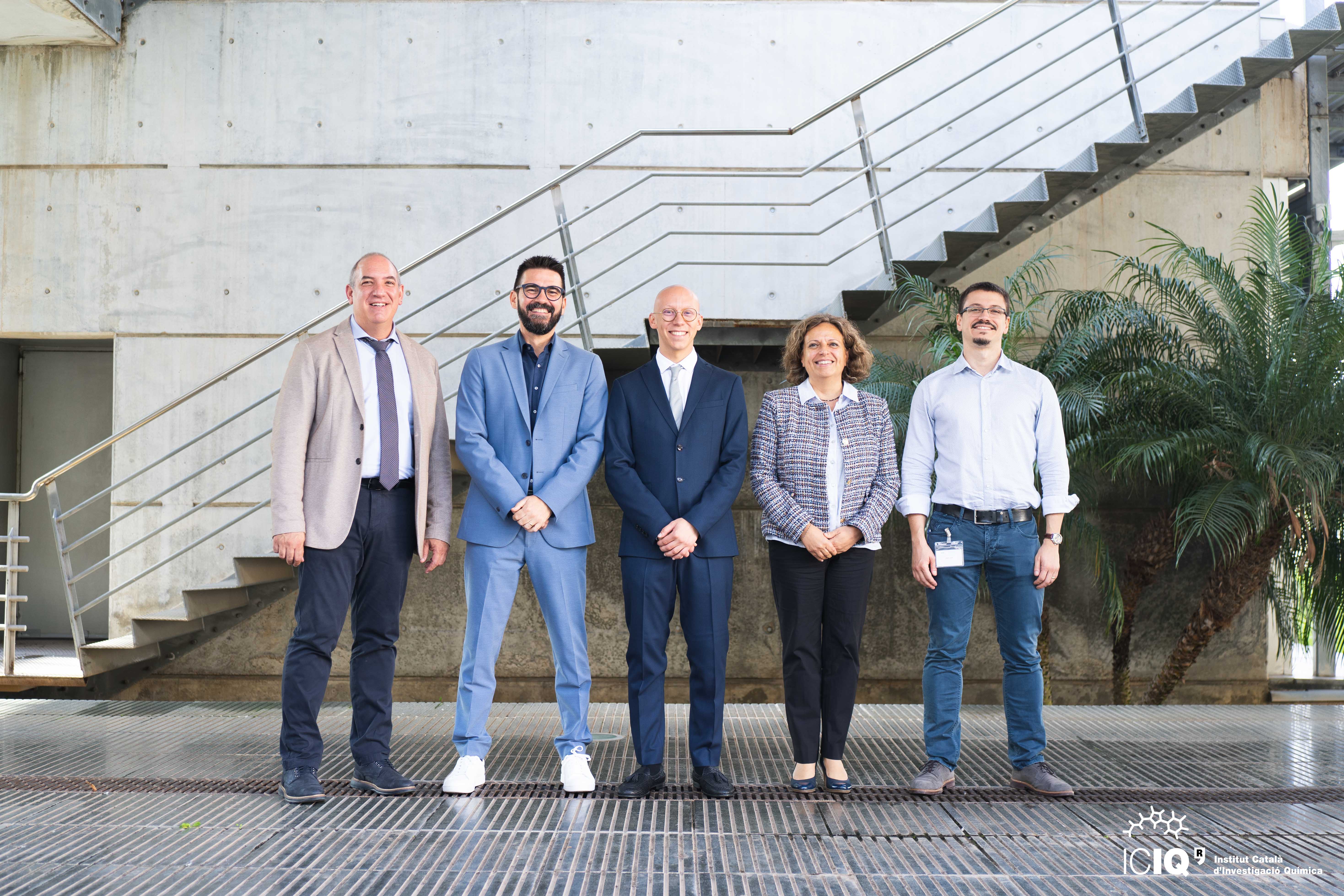 Dr. Balletti with his thesis supervisor and the members of the evaluation committee

Dr. Balletti is from Bologna. He studied chemistry and did a master in Organic Chemistry at University of Bologna before moving to Tarragona in 2019 to pursue his PhD in the Melchiorre group. In his spare time, he enjoys spending time with his friends and loved ones, be that having some beers or just spending time together. He also enjoys reading and watching movies – he’s not particular about the topic or genre, but has high standards on the quality of the final product.

The excitation of organocatalytic intermediates. In the Melchiorre group, we exploit this excitation to generate and use radicals to develop new methodologies to arrive to new building blocks or to forge stereocenters, and in general to promote chemical synthesis. In my case, I was synthetizing chiral molecules, small molecule building blocks that contain stereocenters. I hope my research will be useful for the synthesis of drug-based molecules.

What triggered your interest in the topic?

That you can promote chemical transformations with light. Light is actually the conductor of my research, as my alma mater is in the Giacomo Ciamician (the pioneer of photochemistry) building at the Bologna University. He started the path that made us capable of employing light to trigger radical chemistry to promote chemical synthesis.

Why did you decide to become a scientist?

It’s not something that I planned, it’s just that chemistry was one of the few school subjects that I had fun with. I already liked it, but it was during my bachelors’ that I found my passion for chemistry and fell in love. I started noticing how useful chemistry can be, and that you can even express your creativity through it! I’ve come to realize that when I read publications I don’t like or dislike them in terms of how useful that research is­. Instead, what does it for me is that there’s room for the authors to creatively express themselves. You can tell that from reading a paper.

From the lessons and skills leant during your PhD, which one do you value the most?

Learning how to approach a project. Now, in principle, I would be able to work by myself in a project – I would of course need help, but I know how to develop the project and to conduct research: set milestones, delegate work, write a paper, etc. all those things that aren’t directly related to chemistry, but that are related to the organization. I really appreciate all the things I’ve learnt during this time.

I guess the high school environment… sometimes you love it, others you hate it, but in the end, it’s part of your everyday. You see the same faces every day, maybe you don’t know their name, but in a way, you’ve shared many things with them. I met some great people here thanks to this.

What advice do you have for someone who’s starting now their PhD?

By definition, doing an original thesis means that you’re doing something that no one has ever done before. So, keep calm, push through it and never stop trying.

Do you have a favorite molecule?

The amino acid proline. My thesis is based on organo- and amino-catalysis, and the synthetic starting point for most of the catalysts I’ve used is proline. But also, because proline is probably the molecule that brought forth organo-catalysis as a field.

I’m moving to industry, Farmhispania, because I’m curious to see a new approach. In academy you dig really deep into a single concept, but I assume that industry works in another way. So, since I’m curious, I want to see how research is done from another perspective and broaden my knowledge.

If you were to become a piece of lab equipment, what would you be?

I’d be a Schlenk tube because it helps you remove air from a reaction and to do it in an inert atmosphere. I’ve used it a lot and it’s a fundamental piece of laboratory instrumentation.

Tell us something about you that most people won’t know:

I’m a keen tennis player, especially when I was younger.

Previous
Prof. Echavarren wins Enrique Moles National Research award
Next
ICIQ promotes a new lab dedicated to analysing the products of CO2 reduction: the Energy Lab
This website uses cookies to facilitate user navigation. You can get more information or change the settings of your browser by clicking here. ACEPTAR