Yesterday, the 11th of March, the BIST community gathered to celebrate the advancement of science as well as the societal impact of the IGNITE research projects during the 2020 BIST Ignite Awards ceremony. Two IGNITE projects developed during 2019 were awarded: BIOSPAD, which is developing a new sensor to non-invasively measure blood flow in the brain at a much lower cost than current ones; and BIOVAC, which is investigating a new concept of vaccines for infections without immunological options.

At the ceremony, held at the Auditorium of La Pedrera, five new collaborations among BIST centers were announced – with ICIQ researchers participating in two of the selected projects. The selected projects propose disruptive solutions to challenges as diverse as the development of new therapeutic approaches to Parkinson’s and Gaucher’s disease, the early diagnosis of acute renal failure, a new technology for the differentiation and separation of enantiomers, a new generation of sensors for research in particle physics and the design and production of new quantum materials with potential applications in computing or communications security. These five projects will receive a “seed” aid of 20.000 € each and after a year of research, they will compete for the BIST Ignite Awards 2021.

MAKI
Acute renal failure (ARF) is a frequent complication in major surgeries. Until recently, ARF detection was based on a single biomarker: the increase of creatinine in body fluids, which is a slow process and requires an analytical that can dilate over time. Recently, NGAL protein (lipocalin associated with neutrophil gelatinase) has been identified as a much earlier biomarker of ARF. The MAKI project, led by Dr. Gemma Aragay, from ICIQ, and Dr. Claudio Parola, from ICN2, will develop a new method to simultaneously detect both biomarkers in urine samples, integrating in the same device a detector that reacts to the presence of creatinine by producing fluorescence and also an aptamer capable of detecting NGAL. The ultimate goal of the project is to produce a portable sensor connected to a urinary catheter that will allow healthcare staff to monitor creatinine and NGAL levels with minimum effort. 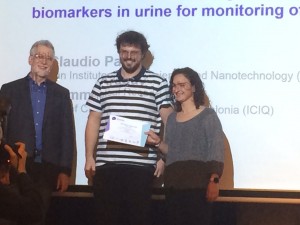 Enantiomers (optical isomers) are chiral molecules, with the same composition of atoms, but arranged in a specular way (as if the two molecules were confronted in a mirror). This characteristic makes enantiomers have the same physicochemical properties, but show completely different behaviors in certain biochemical processes when they are used, for example, in the production of a drug or when designing strategies to eliminate contaminating compounds that contain enantiomers. The only way to distinguish enantiomers is by their different interaction with polarized light, and currently, the only technique available to identify and separate them is chromatography, an expensive and slow process. 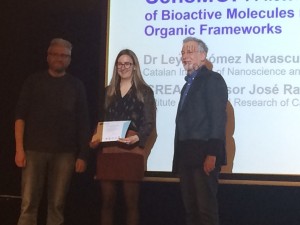 The industrial-scale purification of enantiomers is a challenge for the pharmaceutical industry. The SensMOF project, promoted by ICREA professor José Ramón Galán-Mascarós (ICIQ) and Dr. Leyre Gómez Navascués (ICN2), wants to respond to this challenge by creating new optical nanosensors that integrate the capacities for enantio-separation already demonstrated by the so-called homochiral metal-organic frameworks, compounds formed by metal ions and organic ligands. The project will combine the experience of the two participating teams to create a prototype that gives a solution to the current industrial challenges of scalability and cost of the process.

Previous
ICIQ’s Palomares group participates in the Light4Lungs project
Next
ICIQ takes part in BASE3D project
This website uses cookies to facilitate user navigation. You can get more information or change the settings of your browser by clicking here. ACEPTAR