Lidia Clot, PhD student under the supervision of Prof. Miquel À. Pericàs (ICIQ), has defended her PhD Thesis entitled “Immobilization of Chiral Brønsted Acids and Lewis Base for Batch and Flow Enantioselective Catalysis” (assigned to the department of Analytical & Organic Chemistry of the Universitat Rovira i Virgili) publicly in April the 12th at the ICIQ Auditorium. 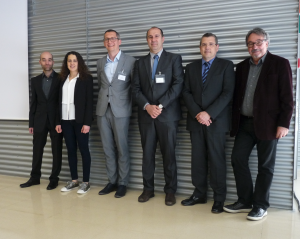 Dr. Rodríguez and Dr. Clot posing on the left of the image. Prof. Albrecht and Prof. Alemán at the centre, and Profs. Vidal and Pericàs on the right.

The following work, entitled “Immobilization of chiral Brønsted acids and Lewis bases for batch and flow enantioselective catalysis”, deals with the design of new supported organocatalytic materials and their application in asymmetric reactions.

The thesis presents a detailed discussion of several synthetic routes for polystyrene immobilization of Brønsted acids and Lewis bases. In particular, it has been possible to optimize a direct and effective route for the preparation of chiral phosphoric acids (CPA) and N,N’-dioxides supported on polystyrene (PS).

To carry out the immobilization, an exhaustive study has been carried out in order to choose the most effective way to modify the homogeneous catalyst, employing the most suitable linker. The characteristics of these new catalysts allow their application in continuous flow systems, contributing in this way to improve the sustainability of the catalytic processes.

The effectiveness of immobilized chiral phosphoric acid catalysts, in terms of catalytic activity, selectivity and recycling, has been proven in allylation reactions of aldehydes and in the desymetrization of meso-1,3-diones. The good results obtained have motivated us to study the implementation of continuous flow systems, where these catalysts have demonstrated their robustness.

Previous
Prof. Rubén Martín receives prestigious international awards
Next
Prof. Llobet workshop in Singapore available on Youtube
This website uses cookies to facilitate user navigation. You can get more information or change the settings of your browser by clicking here. ACEPTAR