A paper by Carles Bo, Javier de Mendoza et al. published in Chemistry A European Journal has been highlighted in the ChemistryViews website. 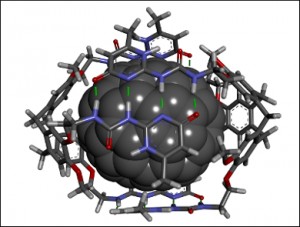 The paper describes that fullerenes C60, C70, and C84 may be readily encaged within a hydrogen-bonded dimeric capsule, based on two concave cyclotriveratrylene (CTV) scaffolds, each containing three self-complementary 2-ureido-4-[1H]-pyrimidinone (UPy) subunits. NMR spectroscopy and circular dichroism studies, complemented by dispersion-corrected DFT calculations, are reported with the aim of characterizing such capsule–fullerene complexes both structurally and energetically. Six fullerenes are considered: in agreement with experiments, calculations find that encapsulation is most favorable for C84 (on a par with C90), and follows the trend C60<C70<C76<C78<C84≈C90. As also found by NMR spectroscopy, the most stable capsules are formed by monomers of identical stereochemistry with UPy and the OMe groups of CTV in a mutual anti orientation and UPy–CTV ethylene linkers within the capsular surface plane. Up to C78, encapsulation is favored by increasing host–guest contacts, but the trend is thereafter increasingly inhibited by growing capsule strain.

The paper was selected as “Hot paper” and it was featured on the cover of the journal.

Previous
Important step towards improving organic solar cells
Next
Martin’s paper most read article in JACS
This website uses cookies to facilitate user navigation. You can get more information or change the settings of your browser by clicking here. ACEPTAR