It’s time to go back to school, and so does chemistry. Young researchers pursuing their doctorate in Prof. Ballester’s research group under the umbrella of the Innovative Training Network of the European project NOAH have created an outreach suitcase with four experiments that students can carry out in the classroom with the goal of bringing supramolecular chemistry closer to students.

NOAH Lab is a scientific dissemination programme aimed at high school students, adaptable to other audiences, which aims to arouse the interest of the students in science through molecular encapsulation experiments. The design of the experiments and explanations that accompany them will allow the students to understand basic concepts of supramolecular chemistry such as the complementarity between molecules and its applications in the real world, such as the controlled release of drugs, sensors or even molecular gastronomy. The four experiments, distributed in two suitcases, are visual, didactic, simple and very tasty, since they include edible spherifications. 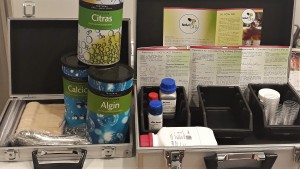 “By carrying out outreach activities such as the European Researchers Night, we are aware of the difficulty of capturing the public’s attention and explaining the concepts behind supramolecular chemical processes in plain language. These experiences have allowed us to learn and develop new outreach projects, such as the NOAH Lab suitcase,” explains Dr. Pedro Ferreira, who has developed his doctoral thesis in the research group of Prof. Ballester.

The young researchers of NOAH Lab have designed the experiments and the dissemination material in collaboration with Dra. Gemma Aragay, NOAH project coordinator. “The suitcases with the experiments are perfect for bringing our chemistry closer to students and trying to awaken scientific curiosity in the younger ones,” says Dra. Aragay, emphasizing that the explanatory booklets for each experiment (and about NOAH Lab itself) allow the experiments to be adapted to different audiences.

During this year’s European Researchers Night, which will be held on September 30 in Plaça Corsini (Tarragona) from 4pm to 9pm, you will be able to visit ICIQ’s stands, among which there will be NOAH’s suitcase. “It is important to disseminate science to encourage curiosity and the emergence of new scientific vocations,” concludes Chiara Mirabella, PhD student in the group of Prof. Ballester within the NOAH Lab programme.

The NOAH Lab Innovative Training Network is a European funding project focused on training researchers in the initial phase (doctorate studies) in a multidisciplinary chemical research program within the area of ​​functional molecular containers, encapsulation processes and their applications. Eight European institutions collaborate in the NOAH project: University of Warwick, University of Barcelona, ​​University of Strasbourg, ISOF-CNR, Covestro, University of Neuchatel, Free University of Berlin and ICHO-PAS. The ICIQ researchers have generated a list of reagents and materials needed to build the suitcases so that the European partners can also bring science closer to the classrooms.

Previous
Three ICIQers participate in the 71st Nobel Laureate Meeting in Chemistry
Next
Auguri, Dr. Spinnato!
This website uses cookies to facilitate user navigation. You can get more information or change the settings of your browser by clicking here. ACEPTAR