Davide Spinnato, PhD student under the supervision of Prof. Paolo Melchiorre (ICIQ), has defended his PhD thesis entitled “Dithiocarbamates: new organic catalysts for the photochemical generation of radicals” (assigned to the Organic and Analytical Chemistry Department of the Universitat Rovira i Virgili) publicly on September 7th. 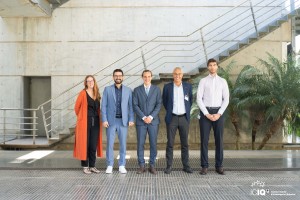 Dr. Spinnato is from Bergamo, Italy. He studied Chemistry at the Università degli Studi di Milano-Bicocca and in 2015 did a master’s in Organic synthesis and catalysis at the University of Milan. In 2018, he joined the Melchiorre group as a PhD student. Outside the lab, he enjoys Tarragona’s Mediterranean lifestyle, which allows him to put his mind away from work and hang out with friends. Aside from the weather, beaches and vermouth, he likes Part Alta, because it reminds him of his hometown’s own old city.

The use of very cheap and commercially available organic molecules that can be used to do catalytic carbon-carbon bond formation under light irradiation. I wanted to find more sustainable ways to do organic synthesis, so I have worked to improve processes and make them more sustainable.

What drove you to become a scientist?

When I was in high school, I had fun studying math, physics, biology and chemistry. It was just enjoyment and curiosity. When you have fun, you can do anything you set yourself out to do, otherwise, it becomes a chore.

From the lessons learnt from your time at ICIQ, which one do you value the most?

When you start your PhD, you are super enthusiastic but as time moves on, you can temporarily lose this enthusiasm. Sometimes this feels like the end of the road, but it’s just a matter of time before it comes back. It’s important to not despair and give up because doing a PhD is tough and it’s normal to doubt what you are doing. Keep in mind that your enthusiasm is your driving force and it will come back if you take care of it.

I’ll remember fondly the time during 2020 when we were working in shifts, and it was only Matteo, Will and me in the lab. We spent all that time listening to a great Italian artist, Lucio Dalla. We would listen to the same concert on repeat for the whole shift for I don’t know how many weeks. Despite everything going on it was very nice, Will was singing in Italian… we had a blast!

Have you ever been emotional over an experiment?

Most of them! When you are trying to do something you’re always emotional because you’re putting 100% of yourself into it.

Who has been your biggest influence during your PhD?

My father, he’s a violin player, so he’s still studying every day and pushing me in the same direction. He is a great example to follow.

What do you like the most about working as a scientist?

I always have questions in my mind, so I go to the lab to look for answers. Most of the time, you don’t get the answer you were expecting or hoping for, but the 0,1% that is in agreement with what you thought makes your day, month and, sometimes, year!

Chemistry is fun because… it’s a game. You need to put on your “electron glasses” to see how electrons move, and start playing!

I’m joining Josep Cornellà’s group at Max Planck Institute in Mulheim (Germany) as a postdoc and will work on bismuth catalysis and radicals.

If you were to become a piece of lab equipment, what would you be?

I’d be the fume hood’s sash because all organic chemists write and discuss their ideas there, so from an intellectual point of view, it’s the most alive thing in the lab.

Previous
A suitcase to take supramolecular chemistry into the classroom
Next
Congratulations, Dr. Jameeimoghaddam!
This website uses cookies to facilitate user navigation. You can get more information or change the settings of your browser by clicking here. ACEPTAR