Spin crossover (SCO) is a long-term investigated case of magnetic bistability that can be promoted by a variety of external stimuli and in a broad temperature range. Recent efforts in our group have been focusing on the analysis of fundamental structure-property relationships in SCO materials and the design and synthesis of multifunctional materials based on SCO complexes. In this presentation, we will discuss some general nuances of the SCO transition followed by examples of hybrid materials combining SCO with conductivity.1

The second part of the presentation will be devoted to light-induced magnetic switching, especially to the comparison of the photomagnetic effects in SCO and organic materials. The use of light to control magnetism at the molecular level is appealing for the development of molecule-based sensors and memory devices. A well-known case of optically controlled magnetic bistability is the conversion between the low-spin (LS) and high-spin (HS) states of transition metal ions – so-called light-induced excited spin state trapping (LIESST). Recently, we have demonstrated for the first time that similar photoinduced switching is possible with all-organic magnetic materials.2 In this new phenomenon, light-induced radical trapping (LIRT), a hypervalent diamagnetic σ-dimer of organic radicals can be photo-converted to a pair of paramagnetic p-radicals. The paramagnetic state shows unprecedented thermal stability, converting back to the diamagnetic dimer only when heated above 242 K – a value unmatched by any transition metal complex.

Finally, a new mechanism for magnetic bistability in organic systems will be discussed. We show that a small N-oxyl radical exhibits a remarkable hysteretic magnetic transition due to the formation of a plastic crystalline phase. In the latter, the radical moieties exhibit highly fluxional behavior, which leads to the wide thermal hysteresis. 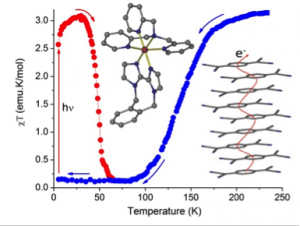 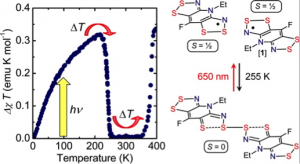