Ensuring the long-term sustainability, reliability, and equality of the chemicals and energy sectors is a central global concern tightly connected to the environment and other societal factors, including quality of life, human health, and the economy. Spearheading the current revolution towards defossilized and circular chemicals manufacture, the vibrant discipline of catalysis is constantly refining its design principles, requiring an increasingly interdisciplinary and cross-scale mindset that covers from atom to planet. In this talk, I will discuss recent examples from my laboratory to illustrate how this intellectual growth in understanding catalyzed processes can kindle revolutionary technological advancements. Specifically, I will demonstrate the importance of precisely controlling the architecture and speciation of supported metals, revealing how even slight structural changes in low-nuclearity catalysts can switch on or off the desired performance. I will show how the precision enabled by the availability of increasingly powerful tools fosters catalyst discovery, presenting case studies in CO2 valorization, polymer manufacture, and organic synthesis. These cases will also exemplify approaches for nanoscale engineering, with an emphasis on scalable and versatile methods. Throughout the talk, I will highlight current frontiers in the synthesis and characterization to improve catalyst design and the importance of quantitative metrics for guiding low-carbon strategies.

Javier Pérez-Ramírez is Full Professor of Catalysis Engineering at ETH Zurich since 2010. His research pursues the nanoscale design of catalytic materials enabling the transition towards sustainable chemical and energy production. He studied Chemical Engineering at the University of Alicante and received his PhD degree at Delft University of Technology in 2002. He is a Highly Cited Researcher in the field of chemistry and his work has been recognized by several awards, most recently the Paul H. Emmett Award in Fundamental Catalysis for the North American Catalysis Society in 2019, the EFCATS Robert K. Grasselli Award for Catalysis in 2021, and the Horizon Prize John Jeyes Award, Royal Society of Chemistry in 2022. In the period 2019-2021, he directed the Green Energy Flagship program at the National University of Singapore. He founded and currently directs NCCR Catalysis (www.nccr-catalysis.ch), a Swiss Centre of Competence in Research devoted to the development of carbon-neutral chemicals across the whole value chain through catalytic processes. He works closely with industry to implement solutions, believes that the greatest challenges in chemistry are solved in multidisciplinary teams, and his true passion is tennis. 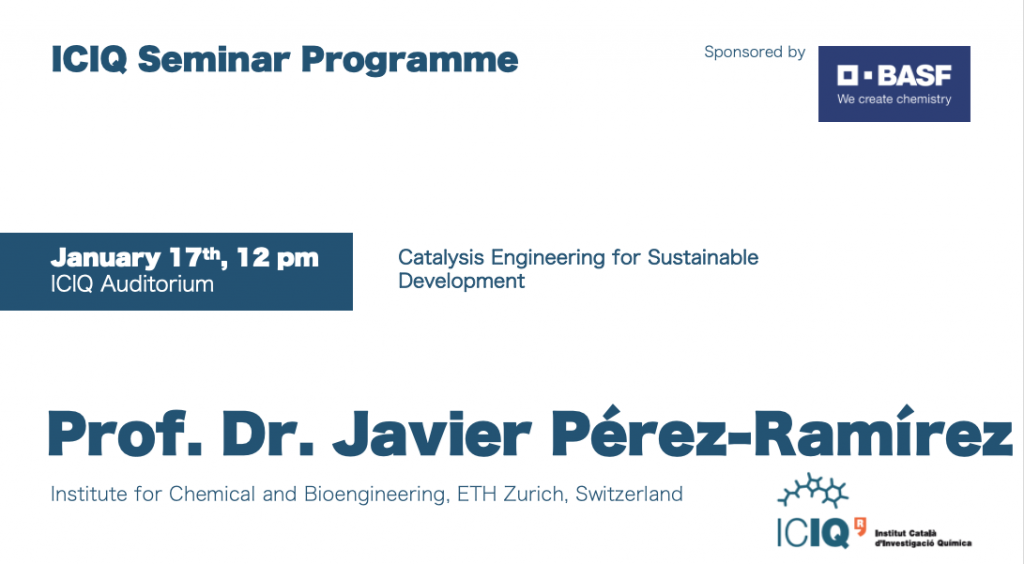