DNA stores genetic information in the form of the sequence of the four canonical bases dA, dC, dG and dT. DNA contains in addition epigenetic information, which is established by the four modified cytidine bases 5-methylcytidine (mdC), 5-hydroxymethylcytidine (hmdC), 5-formylcytidine (fdC) and 5-carboxycytidine (cadC) (Fig. 1, left).[1] Additionally, 5-hydroxymethyluridine may play a role as well. These bases are generated by Tet enzymes. The position and the kind of modified dC-base at a specific position in the genome establishes an unknown 2nd code in our genetic system (Fig. 1, left). Setting and erasing of these epigenetic bases controls the complete development process starting from an omnipotent stem cells and ending with an adult specialized cell (Fig. 1, right). I am going to discuss results about the function and the distribution of the new epigenetic bases hmdC, fdC and cadC in the genome.[2] I am showing how metabolic states influence the chemistry by setting and erasing these modified bases. Synthetic routes to these new bases will be discussed that enable the preparation of oligonucleotides containing these bases embedded. Particularly, isotope dilution and isotope tracing mass spectrometry was used us to understand the chemistry that occurs on these bases in the genome.[3] Interesting is the fact that base excision repair seems to play a central role during erasure of the bases and again mass spectrometry helped to quantify the repair processes involved epigenetics.[4] Finally, I am dicussing potential präbiotic origins of modified bases.[5] 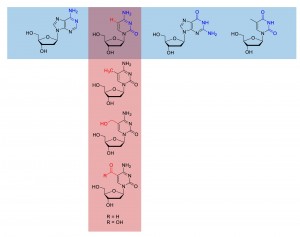 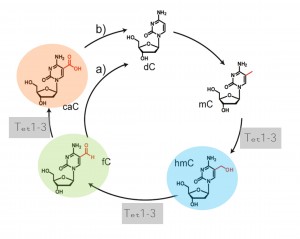 Figure 1. Illustrations of the 2nd orthogonal code that is present in DNA (left) and proposal of how the epigenetic bases are interconverted to establish dynamic changes of the epigenetic code during cellular development (right).

We thank the Deutsche Forschungsgemeinschaft for financial support through the programs: SFB1361 and SFB1309, as well as the DFG Priority program SPP1784. Further support is acknowledged from the European Research Council (ERC) under the European Union’s Horizon 2020 research and innovation programme (grant agreement n° EPiR 741912)

If you would like to attend this seminar, please, register here!