Former ICIQ PhD student Ana G. Herraiz has won the CERCA Pioneer Award for her thesis: “New Carbon Reactivity Rules with Radical Carbenoids and Carbyne Equivalents Enabled by Photoredox Catalysis”. “It’s an honour to receive this prize as it recognises the work carried out during my thesis in the Marcos G. Suero group. It highlights the usefulness of the new methodologies and reagents that we have developed in the discovery of new drugs,” explains Ana G. Herraiz. 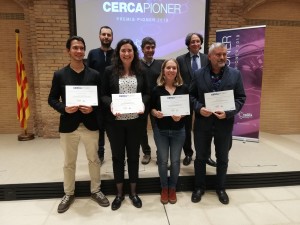 Dr. G. Herraiz (second from the right) with the other laureates

The jury, formed by CERCA researchers, have distinguished Herraiz’s thesis as a pioneer work in chemical synthesis, being an original alternative to a problem that affects the pharmaceutical industry. The research developed during Herraiz’s thesis opens new avenues to improve the efficiency and speed of the drug-discovery processes. The results can also be of great interest and applicability in industries such as agriculture or perfumery.

The award ceremony was held in the CERCA headquarters in Barcelona on December 16th. With a 1,000€ prize, the Pioneer Awards were created by CERCA to recognise researchers who have defended a doctoral thesis with results susceptible to being commercially exploited. The Collider program of Mobile World Capital Barcelona and the Catalan Foundation for Research and Innovation (FCRI) also collaborate with this initiative.

Previous
It’s Cai, Dr. Aijie Cai!
Next
Congratulations Dr. Moneo!
This website uses cookies to facilitate user navigation. You can get more information or change the settings of your browser by clicking here. ACEPTAR