BASF Española has renewed the sponsorship of the ICIQ’s Seminar Programme intended for training researchers. The agreement reflects BASF’s commitment to make an annual donation to ICIQ for a period of three consecutive years, from 2015 to 2018.

The signing of the renewal was held on 3rd December at ICIQ. Both the Vice President and CEO of BASF Española, Erwin Rauhe, and the HR Country Manager Spain, Gustavo Alonso, signed the sponsorship agreement. From ICIQ’s side, the document included the signature of the director of the Research Institut, Prof. Miquel A. Pericàs. 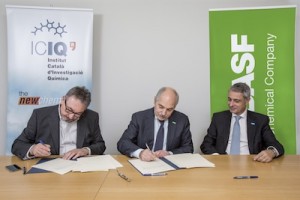 Miquel A. Pericàs, Erwin Rauhe and Gustavo Alonso signing the renewal of the agreement

The ICIQ’s Seminar Programme consist of about 30 scientific seminars per year delivered by national and international outstanding scientists that work in different areas of chemistry. The first edition of this programme was held in 2004 and the programme is open to all researchers of the ICIQ and the scientific community in general.

Previous
Young Scientist Award to Dr. Lloret-Fillol
Next
A paper by P. van Leeuwen, C. Bo et al. on the cover of Chemistry A European Journal
This website uses cookies to facilitate user navigation. You can get more information or change the settings of your browser by clicking here. ACEPTAR