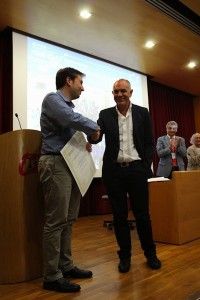 Prof. A. M. Echavarren giving the diploma to Dr. Lloret-Fillol

“It is an honour and a responsibility to have received the ‘Young Scientist Award 2014’ in its inaugural edition. I believe that the award is not only a recognition of the work done in the different groups where I have developed my scientific career, to which I am extremely grateful, but also an extraordinary motivation to tackle new scientific challenges in this new stage” -says Dr. Lloret-Fillol.

Previous
Enantioselective Organo-Photocatalysis with bismuth-based materials as photocatalysts
Next
BASF renews the sponsorship of ICIQ’s Seminar Programme
This website uses cookies to facilitate user navigation. You can get more information or change the settings of your browser by clicking here. ACEPTAR