Eduardo de Pedro, PhD student under the supervision of Prof. Paolo Melchiorre, has defended his PhD thesis entitled “New Organic Catalysts for the Photochemical Generation of Radicals” (assigned to the Analytical and Organic Chemistry Department of the Universitat Rovira i Virgili) publicly on October 13th. 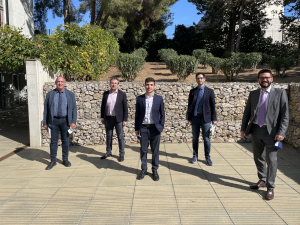 Dr. de Pedro with the members of the evaluation committee and his supervisor.

Dr. de Pedro got his B.Sc. and M.Sc. in Organic chemistry from Universidad Autónoma de Madrid (UAM). After that, he spent two years in Eli Lilly & Co. working in the development of DNA encoded libraries. He joined the group of Prof. Paolo Melchiorre in October 2017. Eduardo likes to travel (mostly cities), cinema and theatre. He also enjoys being with his friends and talking…he loves good discussions.

I have always been a very rational person in the sense that I like to understand how things work. Since I was little, I have always wanted to do research, what I did not know was in what. When the time to decide came, I decided to do experimental because I liked being in a laboratory, and chemistry.

What difficulties did you encounter during your thesis?

The part I found most complicated to me was writing the thesis. Although it is true that I have enjoyed putting three and a half years of my life in a book. In addition, it has been complicated by the COVID situation.

I have learnt how to work in a team. I have been in a very collaborative group and with many people with different points of view and a passion for science. With Paolo, I have always had that freedom of being able to develop an idea and do a project from beginning to end that I have felt that I have contributed my part.

I was very surprised by the Christmas lunch in which I was not expecting so many people. You don’t normally interact with people from other groups and everyone was there.

What do you think we should improve at ICIQ?

Perhaps what I have mentioned, that there should be more interaction and collaboration between different groups. We are very into our research and it would be nice to have views from other groups.

What good advice have you received during your PhD studies?

That sometimes you do not have to think too much about things. Chemistry is an experimental science and if you have an idea, you have to go ahead and test it. But if it doesn´t work, then you have to try it in another way or drop it.

How would you explain to the general public that Chemistry is important?

My parents, for example, know little about chemistry, but they have learnt that chemistry is everything and that you have to avoid simplifications of whether chemistry is bad or not. Obviously, production processes have to be controlled, but our world cannot be understood without chemistry.

I’ll do a postdoc at Max Plank, in Tobias Ritter’s group. I will start in January so I will have time to rest.

An NMR. Without this instrument I would not have been able to do anything, I would have been blindsided.

Previous
Prof. Llobet participates in the 13th International School of Organometallic Chemistry
Next
New Doctor at ICIQ, Dr. Armengol-Relats
This website uses cookies to facilitate user navigation. You can get more information or change the settings of your browser by clicking here. ACEPTAR