Abolfazl Ghaderian, PhD student under the supervision of Prof. Antoni Llobet and Dr. Carolina Gimbert, has defended his PhD thesis entitled “Ruthenium Complexes as Molecular Water Oxidation Catalysts” (assigned to the Department of Physical and Inorganic Chemistry of the Universitat Rovira i Virgili) publicly on January 24th at the ICIQ Auditorium. 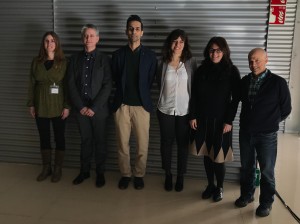 Dr. Ghaderian with the members of the evaluation committee and his thesis supervisors

Dr. Ghaderian was born in Shiraz – the cultural capital of Iran known as the city of roses, nightingales and poetry. He obtained his BSc in Applied Chemistry and MSc in Chemistry at the Institute for Advanced Studies in Basic Sciences (Iran). In 2013 he started twoprojects, one in PET recycling and another on polymers for fuel cell application, thanks to the Young Researchers and Elite Club in Iran. After two years, he moved to ICIQ to start his PhD studies. After four years in Tarragona, he has enjoyed the Mediterranean lifestyle and meeting hospitable people from all around.

I had many good teachers throughout my education, they have helped me grow both intellectually and also as a person. Since then, I have wanted to pay off my debt to mother earth and found that trying to replace fossil fuels with a sustainable energy source is a good way. Also, I enjoy doing science – I would even do it as a hobby!

We have a proverb in Persian, my mother tongue, which says the more a tree grows, the more it becomes humble and its branches come closer to the ground, offering its fruit to everybody. I think Prof. Miquel A. Pericàs is a good example of this proverb: he is not only a good human being but also a good mentor for researchers. He tries to help everyone at ICIQ, I think that permeates the whole institute and is why everybody tries to do their best to make ICIQ a better place.

Once, in our group, we had a Spanish colleague that when we asked him about something, always replied “Mañana por la mañana I will do it”. After several months, I realised mañana didn’t mean the day after but rather “not today”.

I would recommend reading as many papers related to their projects as they can and, if they don’t understand something, to talk about it to supervisors and colleagues because there is always someone willing to help you. Going to seminars and talking to people afterwards can also help you and find new strategies to advance your science. Moreover, finish an ongoing project before starting a new one, even if the results aren’t good. By the time you have finished a project, there are many lessons you should have learnt and should try to apply all of them to the next project.

Whether I stay in Academia or not, I want to be a useful person for society!

Previous
ERC “Proof of Concept” grant awarded to Paolo Melchiorre
Next
Women, Girls and Science
This website uses cookies to facilitate user navigation. You can get more information or change the settings of your browser by clicking here. ACEPTAR