For International Day of Women and Girls in Science, ICIQ participated in different activities and events to empower women in science and promote female scientists as role models for future generations. 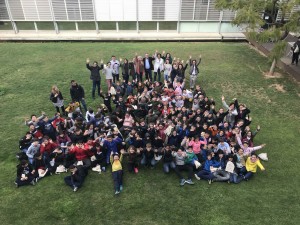 “I was surprised that Lucía had doubts about focusing in research at the beginning of her career. I think her field of research is curious,” said Iker from La Parellada School. “I liked the part where the engineer said that science is different every day,” said Berta, also from La Parellada school. 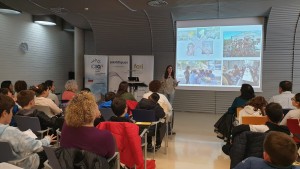 Lucía Morán during the 100tífiques event

At the same time the central event was taking place at ICIQ, more than 180 female researchers from the business world, research centres and universities delivered 150 simultaneous talks about science to children at more than 100 schools all over Catalonia.  Among them, ICIQ’s Bruna Sánchez, who went to Escola Sagrat Cor (Vic) to talk about famous women’s inventions and her scientific career and Mabel de Fez, who gave a talk about her educational journey and doctoral studies at the Escola Elisabetn in Salou.

100tífiques is a science outreach programme of the Barcelona Institute of Science and Technology (BIST) and the Fundació Catalana per a la Recerca i la Innovació (FCRi), in collaboration with the Department of Education of the Generalitat de Catalunya

IUPAC Global Women’s Breakfast (GWB2020): On February 12th, ICIQ hosted the local chapter of this initiative aimed at establishing an on-going virtual network where women in the chemical and related sciences could connect in a meaningful way to support their professional aspirations and to develop leadership skills.

Dr. Elisabet Romero, ICIQ group leader, was one of the three invited speakers. She talked about how she takes action against gender inequality both at work and in her everyday life. The other two speakers were Laura Pérez, Operations Leader at Dow Chemical, who spoke on the importance of networking, and Maria Ferrer, science communicator, who shed light on the stereotypes that are shaping the scientific world. 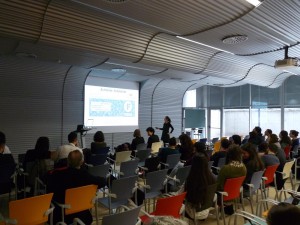 Dr. Elisabet Romero during her talk