Joan Ramon Lao, PhD student under the supervision of Prof. Anton Vidal (ICIQ), has defended his PhD Thesis entitled “Rhodium Catalysis in Enantioselective Hydrogenative Transformations: From the Design of New Ligands to Reactions of Atypical Substrates” (assigned to the Organic and Analytical Chemistry Department of the Universitat Rovira i Virgili) publicly on October 30th at the ICIQ Auditorium. 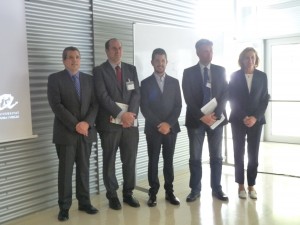 Dr. Lao with his supervisor, Prof. Anton Vidal, and the evaluation committee

The present doctoral thesis focusses on the design and synthesis of modular phosphine-phosphite ligands, on their further application in the development of new efficient and enantioselective catalytic systems for different rhodium-mediated hydrogenative transformations and on their application in the preparation of optically active compounds with biological, pharmaceutical and agrochemical interest. Firstly, a new synthetic methodology for the preparation of phosphine-phosphite ligands, which contain a P-stereogenic group and a single carbon atom spacer between the two phosphorus functionalities as particular structural features, is described. After their preparation, the applicability of the resulting rhodium catalysts in asymmetric hydrogenations and hydroformylations was assessed and high values of regio- and enantio-selectivity in the reaction products were observed. Secondly, the present work also encompasses the development and application of new catalytic approaches for the preparation of enantioenriched sulfoxides through hydrogenative kinetic resolutions mediated by rhodium complexes derived from phosphine-phosphite ligands. This synthetic methodology, in which two enantioenriched sulfoxides are obtained in a single synthetic step, has been applied in a structurally diverse array of racemic unsaturated sulfoxides. High values of enantioselectivity in the reaction products have been obtained. Moreover, the practicality of this strategy has been proved by the preparation of three enantioenriched synthetic intermediates of biologically active compounds. Finally, in the last part of the thesis, the development of a new stereoselective methodology based on a hydrogenative desymmetrization of achiral 1,4-dienes, together with its subsequent application in the preparation of an array of highly enantioenriched and synthetically valuable secondary and tertiary alcohols, are described.

Previous
New hopes for asymmetric [8+2] annulations
Next
Cobalt and tungsten – together to produce cheaper, cleaner hydrogen
This website uses cookies to facilitate user navigation. You can get more information or change the settings of your browser by clicking here. ACEPTAR