Cycloadditions are a useful tool in synthetic chemistry, quite appreciated for their atom economy and high selectivity. However, so far very few chemists have achieved enantioselective high order cycloadditions – reactions that involve more than six π electrons. Now, a team at ICIQ led by Prof. Pericàs discovered a recyclable isothiourea catalyst that promotes asymmetric [8+2] annulations. 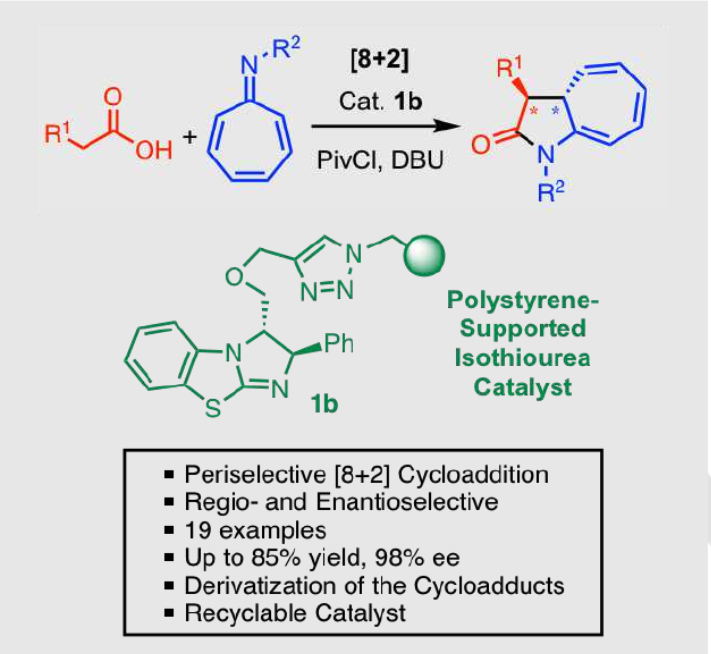 The transformation is catalysed by an immobilised isothiourea that can be easily recovered by filtration. Without further treatment, the catalyst may be reused in a new reaction showing no significant decrease of yield nor stereoselectivity. The accumulated turnover number after seven consecutive recycling experiments was 44.7, almost five times bigger than the TON observed in the classical homogeneous approach for asymmetric [8+2] annulations.

Pericàs’ team also demonstrated the huge potential of this reaction in organic chemistry analysing the behaviour of some of the [8+2] products in Diels-Alder reactions. The result of these experiments was quite satisfactory – it produced the Diels-Alder adduct with total regioselectivity and high enantiomeric excess. The structure of the products was confirmed using X-ray diffraction analysis.

Previous
New Doctor at ICIQ!
Next
Congratulations Dr. Lao!
This website uses cookies to facilitate user navigation. You can get more information or change the settings of your browser by clicking here. ACEPTAR