Giandomenico Magagnano, PhD student under the supervision of Prof. Paolo Melchiorre (ICIQ), has defended his PhD Thesis entitled “Photochemical Processes Enabled by the Direct Excitation of Organic Intermediates” (assigned to the Department of Inorganic and Physical Chemistry of the Universitat Rovira i Virgili) publicly on October 24th at the ICIQ Auditorium. 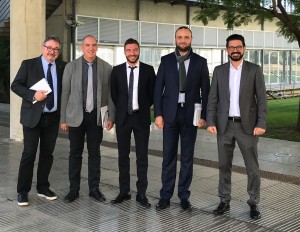 Dr. Magagnano with the members of the evaluation committee and his thesis supervisor

Dr. Magagnano is from Italy’s Abruzzo region, in the Adriatic coast. He studied Chemistry at the University of Pavia and moved to the University of Bologna for his Masters before settling in Tarragona for his PhD. During the four years he has spent in the city he has enjoyed meeting people and the Santa Tecla festivities.

Since I was young, I asked myself a lot of questions so I thought studying chemistry or science would be something that would be fun. I probably chose chemistry because one of my high school teachers told me I wouldn’t be able to do it… so I thought I’d show him better. As a scientist I don’t have a tangible goal, I just want to find answers to the questions I have.

Never give up. I think it’s the best lesson I’ve learnt. It’s not something that someone from ICIQ told me literally but something that impregnates the institute. We have a lot of work to do.

My first Christmas lunch with the group – we went for dinner and had so much fun!

I don’t know yet, I’d like to stay in Tarragona longer, so hopefully, I’ll find a position in the area.

A special Thin Layer Chromatography (TLC) pen. The pen is my idea and it makes it easier to handle the samples and spot them on the TLC… which is the first thing you use to know how a reaction works.