Nathan Daelman, PhD student under the supervision of Prof. Núria López (ICIQ), has defended his PhD Thesis entitled “Theoretical investigations into single-atom catalysts on cerium dioxide: deposition and activation” (assigned to the Department of Physical and Inorganic Chemistry of the Universitat Rovira i Virgili) publicly on October 17th at the CTTI Auditorium. 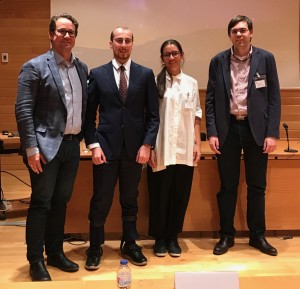 Dr. Daelman with the members of the evaluation committee

Dr. Daelman was born in Lebbeke, in Belgium’s East-Flanders province. After participating in several science Olympiads held by Universities but for high school students, he settled on the Catholic University of Leuven where he majored in Physics. At university he also took up some Math and Chemistry classes. Dr. Daelman has always been interested in studying Chemistry from a physicist’s point of view. That’s also why he joined Prof. López’s team at ICIQ in 2016. He likes to work out at the gym and he’s also a cinephile who loves talking with people to see their perspective on films.

A sense of wonder for the world, which I felt from a young age. I used to watch “Once upon a time… the human body” and similarly science themed kids shows. I adored them, especially the documentaries on quantum mechanics, because they would blow my mind. Still, I felt that they only provided a glimpse of something more profound. My scientific interest solidified when, at 10 years old, I got my first library card: I started reading this series called “The elements”. The first  edition I picked up was on nitrogen, a substance that makes up over 70% of the air while at the same time you cannot breathe in it. As a kid, this amazed me. That was my very first experience with Chemistry.

As far as personal achievements go, I want to see how the single-atom theory evolves. While on a grander scale, Computational Chemistry  is met with one huge puzzle: if we put a lot of electrons together in a system, we don’t know how to exactly solve it. There are entire libraries dedicated to approximating and mitigating this issue. We know that there is a single mathematical formula that dictates all chemical properties, but we seem to be missing some fundamental insights in how to get there. This topic keeps evolving however and it is good to keep an eye on. The field is now starting to use Artificial Intelligence, so it’s becoming even more exciting!

I have come to see much better how Science works: where the appreciation lies and the importance of dissemination to various kinds of audiences. Up to the Master’s you get to attend some seminars and workshops, but once you actually enter a field, you get a hands-on approach and that’s much more interesting. This I admire also about my supervisor, Núria López: she has a deep understanding of how the academic world works and importantly, manages to convey this to her students.

All the team activities, like the calçotades are great. Each year we have one and we all look forward to it. In my second year here, we went to Maria Besora’s orchard for the calçotada and it was a terrific day. I was very happy to be there: you get to cook, drink and eat together. Afterwards everyone’s clothes smell like hell, but it’s been fun – exhausting but fun.

What do you wish you’d know at the beginning of your PhD?

As computational chemists, we work with heavy files systems: our requirements are gargantuan and we keep pushing the limits of what computer science can do. In my case, I have filled up about 10 terabytes of data over a 3-year time period. Somehow, I luckily still manage to find my way among all the files. So you start out thinking that you have a nice system but it grows to immense proportions very rapidly. If I were to restart I would definitively design a better system. During my PhD, I have also come to appreciate the power of automatization. I have learnt a lot about programming and I am grateful for the opportunity: it really speeds up the working process.

I’ll continue working at ICIQ with Núria López, as a postdoc now, for a year at the least. Afterwards, I don’t know yet. I am really curious about what will come out of the Nature Materials paper we recently published: we have even more evidence now supporting our thesis, so I’m optimistic. Let’s see how the academic community receives it.

I’m a computational chemist so my answer is easy: a calculator or a computer (which is basically an overgrown calculator). The graphical calculator that I used in high school (the TI-84) stands out in particular. It’s a fun machine and less distracting than a computer.

Previous
New doctor at ICIQ: Dr. de Aguirre
Next
Congratulations Dr. Magagnano!
This website uses cookies to facilitate user navigation. You can get more information or change the settings of your browser by clicking here. ACEPTAR