Irina Sagamanova, PhD student under the supervision of Prof. Miquel A. Pericàs, Dr. Sonia Sayalero adn Dr. Carles Rodríguez-Escrich, has defended her PhD Thesis entitled ‘New Approaches to Catalyst Design and Immobilization’ (assigned to the Organic and Analytical Chemistry Department of the Universitat Rovira i Virgili) publicly on December 14th at the ICIQ auditorium. 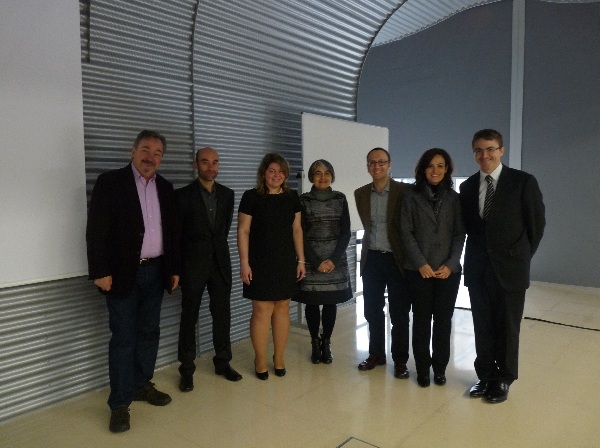 Dr. Sagamanova with her supervisors, Prof. Miquel A. Pericàs, Dr. Sonia Sayalero and Dr. Carles Rodríguez-Escrich, and the evaluation committee.

This Thesis covers two main sections: (a) studies towards the synthesis of new immobilized organocatalysts and their application in a wide range of enantioselective transformations with the main goal of developing new continuous flow processes and (b) homogenous catalysis aimed at improving recently reported reactions of sulfenate anions. The first part of this work is devoted to the application of polynorbornene as a robust support for the immobilization of homogeneous catalysts. In the following chapters, new polymer-supported β-fluoroamines have been developed with two different approaches: copolymerization and click chemistry. Finally, in homogeneous catalysis, improved methodologies for the Pd-catalyzed formation of aryl sulfoxides with more available aryl chlorides have been presented. In addition, a new pre-catalyst has been developed for the sulfenate anion-mediated coupling of halides to generate stilbenes.

Previous
Julio Lloret-Fillol appointed ICREA Research Professor
Next
New Doctor at ICIQ!
This website uses cookies to facilitate user navigation. You can get more information or change the settings of your browser by clicking here. ACEPTAR