David Bastida Borrell, PhD student under the supervision of Prof. Paolo Melchiorre, has defended his PhD Thesis entitled ‘Novel Enantioselective Aminocatalytic Processes by means of Vinylogous Reactivity and Photoredox Catalysis’ (assigned to the Organic and Analytical Chemistry Department of the Universitat Rovira i Virgili) publicly on December 15th at the ICIQ auditorium. 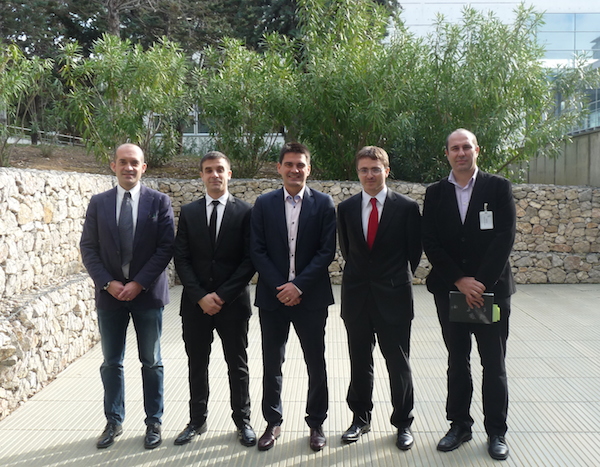 Dr. Bastida Borrell with his supervisor, Prof. Paolo Melchiorre, and the evaluation committee

In the present thesis it is shown how aminocatalysis may be used to solve some problems for synthetic organic chemists. Combination of aminocatalysis with the concept of vinylogy is the key concept for the enantioselective functionalization of remote positions of carbonyl compounds. In the first chapter, a bifunctional primary amine-thiourea catalyst that can combine H-bond-directing activation of the electrophile with the dienamine activation is used for an asymmetric vinylogous aldol reaction. It has been demonstrated that using a chiral secondary amine, the potential of organocascade catalysis can be expanded by including vinylogous reactivity, functionalizing  exclusive γ and δ positions. In the last chapter, it has been developed an enantioselective radical conjugate addition of enones by trapping photochemically generated carbon-centered radicals using iminium ion activation.

Previous
Congratulations Dr. Sagamanova!
Next
Face to Face with Ana Moore
This website uses cookies to facilitate user navigation. You can get more information or change the settings of your browser by clicking here. ACEPTAR