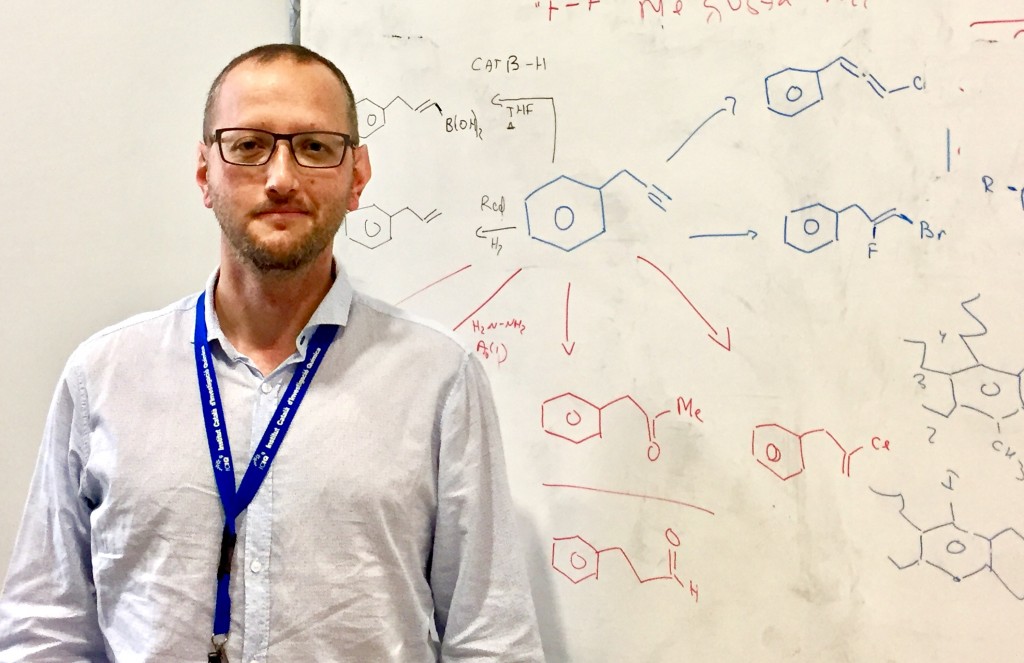 Born in Ukraine, Alexandr Shafir studied chemistry in the US, where he obtained his PhD from the University of California Berkeley in 2003. Then, he did a post-doctoral stay with Stephen Buchwald at MIT and later was awarded a Ramón y Cajal Fellowship at the Autonomous University of Barcelona. In 2013, he became the first ICIQ Group Leader under the Starting Career Programme (SCP). Now, after 5 years developing his own research in Tarragona, he will continue his career in Barcelona.

When did you decide to become a scientist?

I knew since I was a kid. My grandpa already did heterogeneous catalysis back in the USSR, my cousin was also a chemist – he taught me the periodic table when I was 10. We also loved to develop photography, we used our bathroom as a dark room! It was quite clear that I was going to be a chemist, I loved to read the old chemistry journals my grandpa had collected over the years.

What are the more promising areas in Science?

I like methodology, so I usually think about my field. I think everything related to controlling the selectivity of chemical reactions has great potential. Precisely tuning which bond you want to break, which group you want to activate, some advances in this type of fine control are already being published and they are fascinating. And, in a more general scope I think photochemistry is really promising, and I believe electrochemistry is going to be back very soon.

Where do you find inspiration for your research?

For me, inspiration is usually a point where a desire to explore a certain concept or transformation, and a vague notion that this should, in principle, be doable, meets a key piece of data which makes me think – yes, I think I know how!
One of my fascinations is ethylene, I hope that in the near future we will be able to control the oligomerisation of ethylene, something that is quite hard right now. There are some catalysts to obtain up to tetramers, but that’s it! I would love to find the way to make decene. Ethylene is a long-forgotten source of carbon, we have to learn how to make the most of it.

What would you say to young researchers?

It’s complicated! But I would always recommend them to follow their passion. When you prepare a new molecule, when you find an unexpected result in the lab, that eureka moment, that happiness is complicated to reach elsewhere. You have to understand science sometimes requires big efforts, but satisfactions are way bigger. If you’re passionate about chemistry, making discoveries in the lab is priceless.

What are your thoughts about ICIQ and the SCP you followed?

Being at ICIQ has been a very positive experience, asit gave me tools and resources I couldn’t have gotten anywhere else. I think that my new position in Barcelona is a direct consequence of my stay in Tarragona, where I was able to develop my own, independent research with a great group of people. As the first person within the programme there was definitely some uncharted territory, and so one may feel like a guinea pig at times. I know that the new calls have taken that experience into account, and will certainly be a great opportunity for new junior group leaders.

Favourite scientist: in Chemistry I would name Irma Goldberg. She can probably be considered the co-founder (with Fritz Ulmann) of what we now know as metal-catalyzed cross-coupling. As for science in general – perhaps Geoffrey Marcy, an astrophysicist (I took a class he was teaching), one of the pioneers in discovering extrasolar planets.

If you hadn’t been a scientist: I would have gone into archaeology. I can see myself spending months on a dig uncovering a pyramid.

A book: In the end, I always come back to the books I read as teenager. For example, anything from Sergei Dovlatov, who chronicled the absurd humor of the Soviet reality. For example, the Zone.

A movie: The Groundhog day

Science is…: still trying to figure it out. Will let you know.

Previous
New Doctor at ICIQ!
Next
Cobalt–copper tandem to reduce carbonyl groups
This website uses cookies to facilitate user navigation. You can get more information or change the settings of your browser by clicking here. ACEPTAR