One of ICIQ’s main objectives is to further the science of chemistry towards a more sustainable future. However, training future generations in this idea is just as important. To this end, ICIQ director Emilio Palomares has signed an agreement with Roc Muñoz, mayor of La Canonja, to develop the Green, Educational and Scientific Project.

“Finding allies to help achieve your goals is as important in science as it is in life. Thus, we want to open the doors of our centre to bring research in green chemistry to the citizens of La Canonja. This will allow us to strengthen our bonds with the territory and promote vocations in science in our country” says Emilio Palomares, ICIQ director.

The Canonja Green, Educational and Scientific Project will be a one-year collaboration divided into two parts. Part of the agreement will be employed to provide financial support to an ICIQ predoctoral researcher, who will develop a project of their own in the field of green chemistry under the Green, Educational and Scientific Project umbrella. The second part of the project consists of outreach activities aiming to inform and train the public of La Canonja on green chemistry. The goal here “is to awaken scientific-technological vocations from childhood, promoting the use of the scientific method and experimentation in primary, secondary and high school students,” says Mayor Roc Muñoz. The project also aims to promote scientific literacy among young people and adults, as well as in the elderly. 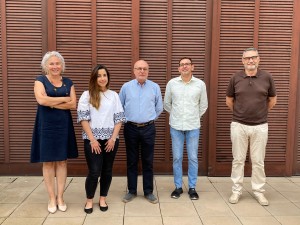 Geyla Dubed, a predoctoral researcher from the Lloret-Fillol group, also attended the signing of the agreement as she will develop the winning proposal “Production of fuels and synthesis gas from CO2 and water. “During her PhD Dubed will develop the proposal, which focuses on the creation of an electrocatalytic flow cell for the transformation of CO2 into synthesis gas (CO and H2). The proposal aims to advance this technology as, despite its great potential, durable and high-performance electrolyzers for this transformation have not yet been developed on an industrial scale.

Now, the partners need to specify how these outreach and training actions will be carried out, which could be in the form of extracurricular activities, talks, conferences or workshops for the general public. “One of the first actions that is already being worked on is the participation of ICIQ in the La Canonja Science Week,” explains Mayor Muñoz.

Previous
ICIQ participates in the European Researchers’ Night
Next
Risky research
This website uses cookies to facilitate user navigation. You can get more information or change the settings of your browser by clicking here. ACEPTAR