For the fourth consecutive year, Tarragona is one of the host cities of the European Researchers’ Night. Under the motto “Research for change”, the event wants to convey the importance of the research carried out in Catalan institutions and its impact on our daily lives. 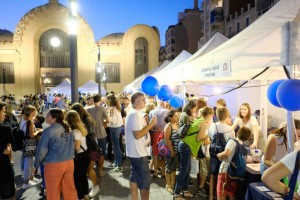 About the Catalan European Researchers’ Night

The European Researchers’ Night is a science outreach project promoted by the European Commission in the framework of the Marie Sklodowska-Curie Actions within the Horizon 2020 programme. A Europe-wide initiative, it takes place in more than 300 European cities on the same day.  Coordinated by Universitat Rovira I Virgili, this is the fourth year that the European Researchers’ Night brings together Tarragona’s university and research centres ICAC, IISPV, IPHES and ICIQ, to bring research closer to the wider public. For the last two years, the night has been organised at the Catalan level, offering more than 200 informative activities for all audiences in venues such as universities, museums, bars, libraries and civic centres of the five cities involved: Barcelona, ​​Girona, Lleida, Tarragona and Vic.

You can find all the information about the event at: tarragona.nitdelarecerca.cat

Previous
Congratulations, Dr. Gandolfo!
Next
ICIQ and La Canonja City Council sign an agreement to develop an Educational and Scientific Project
This website uses cookies to facilitate user navigation. You can get more information or change the settings of your browser by clicking here. ACEPTAR