Finding the right partner for a job can make all the difference – in science as much as in life. For the URV project INSPECTION (IN Situ device for Pollutants dEteCTion In cOntiNuos, financed by AGAUR and FEDER), the right team included ICIQ’s Mechanical Workshop. 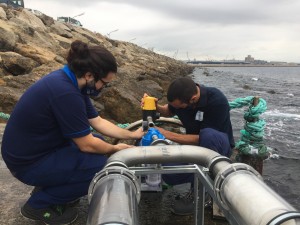 León and Terrado assembling the device at the Port of Tarragona.

This summer, Jose Luís León and Aleix Terrado have undertaken a project outside their usual scope of work, and have built a device that will allow the INSPECTION project to continuously monitor water quality and provide alerts in case of contamination. “The URV researchers approached us asking if we could replicate the cylinders they used to measure contaminants in the water of the river so that they could be used on seawater,” explains León. It was this adaptation to seawater that allowed the project to partner up with DARP and FEMP. So, the ICIQ mechanic workshop got to work and designed the prototype that was installed in the Port of Tarragona last week. 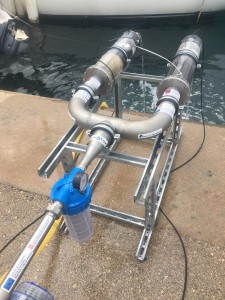 “It’s quite different from what we usually do at ICIQ,” admits León “but it’s been a great learning experience.” The device collects water from the sea and with the help of a hydraulic pump pushes the flow into the two separate cylinders where the biosensors are located. Together with IGLinox (the company that installed the gas systems at ICIQ), León and Terrado built the piece where the water flux is divided. “The most challenging part was calculating the pressure of the water pump since both cylinders need to have the same flow of water but have different fillings: one is activated coal, while the other is an inert filling,” explains León.

This difference in the filling is crucial to the test. On one branch the water comes through an inert filter, so there are no changes when compared to the seawater, but on the other branch, the water is depurated with an active carbon filter. Once the water goes through the fillings inside each of the cylinders it reaches the biosensor, which includes the biofilm. This is a community of microalgae and bacteria, the main parameter of this biosensor is photosynthetic efficiency, which is affected by pollutants. A contamination alert will be given when there is a significant difference between the two chambers (the one that receives purified water and another one that receives non-purified water). 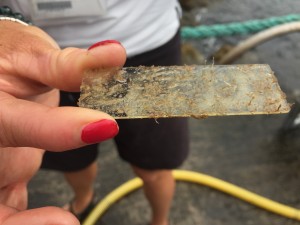 Close-up of the microalgae and bacteria that constitute the biofilm.

The device will be tested during a week. As Roberta Carafa, Principal Investigator of the INSPECTION project and postdoctoral researcher in the URV Department of Chemical Engineering, puts it “the next step will be to optimise the system. Now it’s quite big, so we’d like to make it smaller and simpler.”

Right now, the monitoring of water for micro-contaminants such as pesticides, heavy metals or pharmaceuticals, is based on grab sampling, which is not an efficient method. Biodiversity measures of algae or fish can give insights on contamination status but lack specificity and are expensive. The solution proposed by the URV researchers is the bio-sensor, where the changes in the physiological parameters of a living microbial community are continually measured, and thus it is known if and when they are exposed to pollutants. This device will provide high time coverage and will react to the whole toxic mixture present in water. 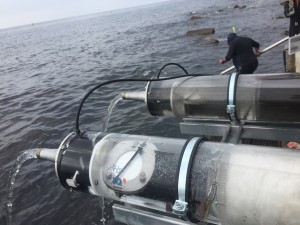 The functioning device installed at the Port of Tarragona.

Previous
Ingenious meetings in Lindau
Next
The surprises of scaling up
This website uses cookies to facilitate user navigation. You can get more information or change the settings of your browser by clicking here. ACEPTAR