Craig Day, PhD student in the Martin group has remotely attended the 2021 Lindau Nobel Laureate Meeting. Day is currently doing a six-month placement in John Hartwig’s lab at UC Berkley, where he’s studying the mechanism of an iron-catalyzed C(sp3)-H azidation reaction the Hartwig lab published in Nature in 2015. From the 27th of June to the 2nd of July, Day joined the talks, seminars and activities (despite the nine-hour time difference) with the people at Lindau. Together with other young researchers from around the globe, Day has had the chance to meet 70 Nobel Laureates from the disciplines of Physics, Chemistry and Medicine. Here’s what Day has to share about his experience at the 70th Lindau Nobel Laureate Meeting:

What would be your take-home message?

Don’t be so critical of your own ideas and interpretations. Listening to the Nobel Laureates describe their journey and work, I found it insightful when they talked about the beginnings of their research and the uncertainty and doubt associated with it. I feel that as scientists, chemists are very critical of themselves and their ideas. In part, this happens because we see these papers published in journals where the story and results fit together perfectly. But most ideas are not created the way they are presented. Rather, after a lot of work, and failure, projects turn out that way because you build the narrative in retrospect and put your idea at the centre of it. What I learnt from most of the talks is that it’s often not clear at the beginning the significance of our work and what exactly it will be worth.

To me, it was a humbling experience. There’s a lot of very intelligent people, who are extremely dedicated to their work and we should be thankful for that. Listening to the laureates, they talked about the people that helped them along the way and that their discoveries were not theirs alone but many people build the foundations for the Nobel’s success. There’s a lot of passion in science, and you could very obviously see that at Lindau. 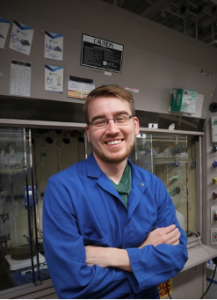 What seminar did you enjoy the most?

I thought Prof. Dr. Robert Lefkowitz’s seminar was quite enjoyable. He won the 2012 Nobel prize in Chemistry together with Prof. Dr. Brian K. Kobilka for their studies on G-protein-coupled receptors. My background is in pharmaceutical chemistry, so I took a lot of biology courses and this is one of the heavily studied proteins. It was very cool to listen to the people who developed G-protein-coupled receptors talk about their work and their discoveries.

They came across as very nice, kind and genuine people – which I didn’t expect. It surprised me because as a cliché, you’re supposed to be serious to do good science, but that was definitively not their case. There’s obvious value to being an encouraging boss. They also talked about how they would de-stress when their experiments aren’t working. For instance, on Friday they would have a BBQ to relax. I feel scientists need to talk more about finding ways to handle stress, the pressure of working under challenging conditions, or strict deadlines in projects. It’s important to find a balance.

Something that surprised you:

That the people behind Nobel prizes are everyday people, like you, me and everyone else. It was very grounding to realize this. While they are undoubtably extremely smart, they weren’t intimidating and came across as excited and passionate. It was encouraging because it felt like if you had a good idea and you put the work in, you can make an impact.

Also, I found interesting the “lineage of Nobel prize winners.” From what they were saying in the talks, many people who had won the Nobel prize had worked for someone who had also won the Nobel prize and so on. There were very close connections among them. I guess it’s quite straightforward: you want to work at labs that do great science so you learn yourself the ways and approaches to do great science. I think it’s something important for people considering their career choices as it can hugely impact your future.

Is there anything you learnt from the talks that you could apply to your everyday work?

The one thing that stood out is to pursue ambitious ideas. I feel there’s almost an aversion to it because oftentimes ambitious ideas are more likely to fail. But I think that’s a poor way to approach science since if you don’t pursue big ideas, you’re already limiting your results and will not end up discovering anything very meaningful. So definitively, pursue ideas that are out there and trust yourself.

Each year, highly talented young scientists are recruited worldwide among undergraduate students, master and doctoral students and young postdoctoral scientists to participate in the Lindau Nobel Laureate Meetings. Participants must be below 35 years of age, speak English fluently, have an excellent academic track record and at least one letter of recommendation. Check the selection criteria for the 71st Lindau Meeting (which will be focused on Chemistry) here.

Previous
Congratulations, Dr. Qingqing Sun!
Next
ICIQ & URV collaboration to assess pollutants in water
This website uses cookies to facilitate user navigation. You can get more information or change the settings of your browser by clicking here. ACEPTAR