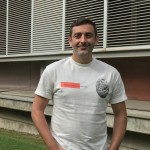 Juliá developed his PhD thesis at Universidad de Murcia under the supervision of Dr. Pablo González-Herrero, focused on the synthesis and photophysical studies of organometallic platinum complexes. During this time, he was also a visiting student in the group of Prof. Corey Stephenson at the University of Michigan (USA). After working for a brief period in the pharmaceutical industry at Eurofins, he joined the group of Prof. Daniele Leonori at the University of Manchester as a postdoctoral researcher. His work there targeted the generation of C–N bonds via photoredox catalysis and the development of new agents for atom-transfer radical reactions. In 2020, he moved to Germany and joined Prof. Tobias Ritter’s group at the Max Planck Institute for a second postdoctoral placement where he worked on novel strategies for late-stage functionalization and mechanistic studies of regioselective aromatic C–H functionalization reactions.

Can you tell us about the research you’ll take on as a Junior Leader ”La Caixa” Fellow?

My goal is to find replacement catalysts for palladium-catalysed cross-coupling reactions to produce high-value products, such as medicines or agrochemicals. Palladium works extremely well as a catalyst, but it’s in risk of depletion, expensive (its price has increased about 300% in the last few years) and toxic. So, I want to replace it with a cheaper, non-toxic and abundant metal, hopefully, iron. If this was easy, it would already be done, so I’m on for a challenge.

The novelty of the project will be the activation of iron compounds with the energy of light (be it from the sun, a lightbulb or LEDs) to make them behave like palladium. This way, iron will be able to perform reactions out of its reach. I want to use the energy of light because it’s clean and selective but at the same time, very potent. Lately, there has been a lot of research on this topic, but it’s difficult to generate the active species of iron that behave like palladium. Photons are very selective, so we will apply the photon’s energy to generate the catalytic active species. This way, we’ll avoid using aggressive reactants and will be able to perform late-stage functionalisation of complex molecules.

For a chemist, this is completely uncharted territory! The reactivity of iron compounds under light irradiation remains fairly unexplored, at least, not applied to organic synthesis. We’re looking at the tip of the iceberg, so we have the potential to discover new reactivity, which is very exciting from an academic point of view.

What impact would you like your research to have?

I’ve always guided myself by the pursuit of excellence and go for high risk – high reward projects. So, I do hope this project has a big impact because it’s actually designed for it. As something that is beyond what is possible right now, replacing palladium catalysis with iron catalysis would be impactful enough for both social, economic and environmental points of view. From an academic point of view, if we manage to understand and control how to use light to perform catalysis with abundant metals, that would be a significant advance. If the strategy works, we’d open a new field where we could discover many new reactions and open new doors to unexpected areas.

Has everything in your career gone according to plan?

No, luck and timing always play a role in whatever you do. Usually, things that at the time I considered to be negative, have later had a positive impact on my career. Actually, my supervisors have told me similar stories. For instance, I started my thesis in José Vicente’s group. He retired as I was starting and I thought that would have negative repercussions, but instead, I had more freedom to develop my thesis under the supervision of Dr. González-Herrero and this proved to be extremely important to define my career. Later, I struggled to find a postdoc, it took a while but, in the end, I ended up joining the Leonori group and it has been great and the most productive time in my whole career. Things don’t always work out the way you planned, but that’s life and you need to adapt and make the most of it.

What is the best advice you’ve received career-wise?

That I should do whatever I want to do long term and not to despair if something I really wanted to work doesn’t. In the end, these are moments when you need to be aware that opportunities have their own timing and you need to adapt to them. You need to learn to play your cards and keep on going in the direction you believe is the best. Something that wasn’t your first choice ends up being your best decision.

Do you have any advice for people starting their thesis?

To open up their horizons. Take risks, especially when you finish your thesis – we tend to stay in a comfortable place, and that limits our scientific horizons. So, try doing something different because you’ll have a wider vision of your area of knowledge, so you’ll have your own ideas and tools to carry on your research. If you stay in a very specific field and don’t know how to do other stuff, you will be limiting your potential.

If there were a motto hanging at your lab’s door, what would it be?

“Don’t give up!” You don’t need motivation when everything is working fine, you need it during bad times and doing research can be tough. Although it’s an emotional rollercoaster, you need to be stable and think about the long-term goal to remain motivated and enjoy the journey as it is, with its ups and downs; in the end hardwork pays off and you will find doing research very rewarding.

Previous
Junior Leader: Katherine Villa
Next
ICIQ Auditorium in memory of Prof. Dr. Kilian Muñiz
This website uses cookies to facilitate user navigation. You can get more information or change the settings of your browser by clicking here. ACEPTAR