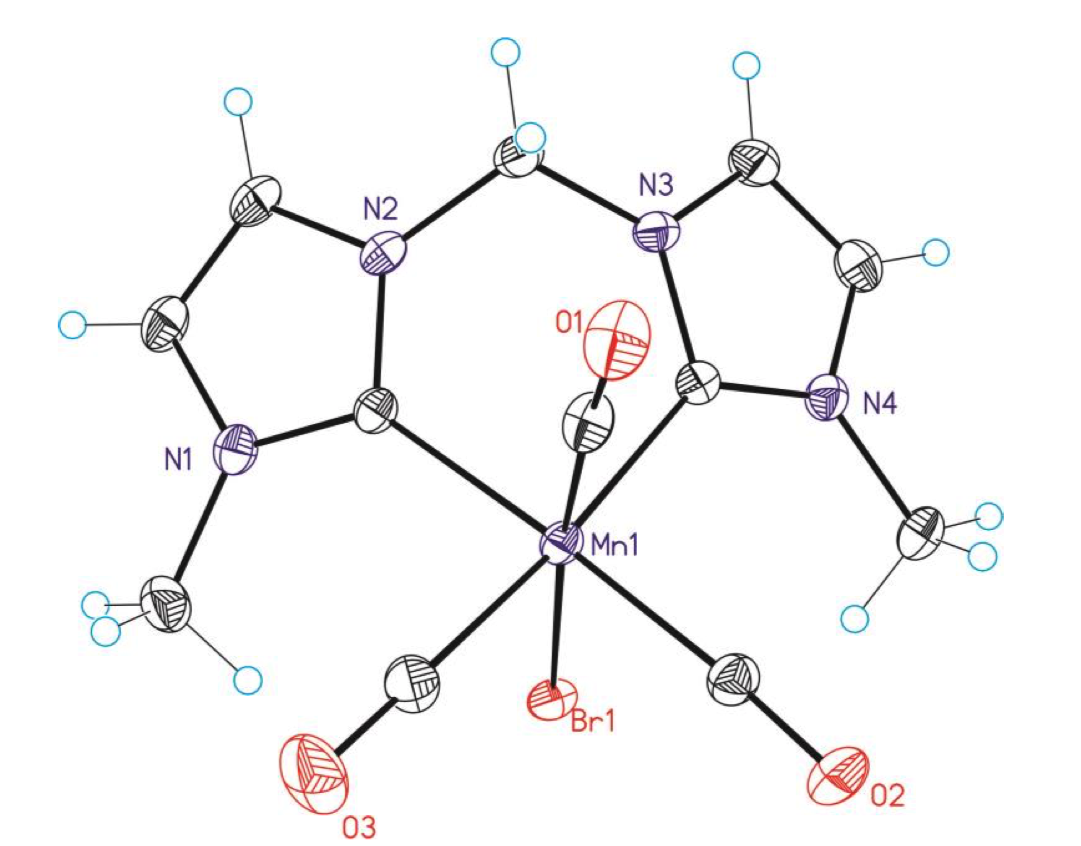 Imagine transforming carbon dioxide in a sustainable feedstock for the production of value added chemicals. This could be possible thanks to efficient catalysts that could reduce CO2 using renewable energy. Some homogeneous catalysts based on earth abundant metals like manganese and bipyridine ligands show promising results for a selective conversion of CO2 to CO. On the other hand, reported manganese-based catalysts containing non-diimine ligands  are rare and usually inefficient, including systems with mixed pyridyl/N-heterocyclic carbene moieties.

Now, ICIQ researchers, in collaboration with chemists at Nova University in Lisbon, Portugal, have developed a novel manganese(I) complex featuring a bidentate N-heterocyclic carbene that outperforms all the electrocatalysts synthesized to date. The octahedral complex was fully characterized using NMR, IR, and X-ray crystallography, and showed spectroscopic features in concordance with previously reported manganese carbenes.

The manganese catalyst was tested for the electrochemical reduction of CO2 to CO. In terms of selectivity, it achieved faradaic efficiency of up to 95% – which is almost 5 times bigger than the previously observed for mono-carbene derivatives. It also exceeded 100 turnovers in 8 hours without a decrease in its catalytic activity. During that same period of time, other manganese alternatives fail to reach similar turnovers, even when applying higher voltages. In terms of TOF, this new Mn(I) complex produces the highest values ever reported for this metal: 320000 s-1.

However, to reach such exceptional results, the catalyst requires the addition of small quantities of water. Researchers performed both voltammetry, in-operando IR spectroscopy and DFT computational calculations to study this phenomenon. They  characterised a key manganese(-I) intermediate that may explain the enhanced catalytic behaviour – the addition of some water accelerates the process thanks to proton availability, but excess of water is counterproductive for catalysis.

Chemists are currently pursuing further analyses to understand the reduction mechanism, as new, more efficient CO2 reduction processes will lead us to a win-win situation – the reduction of greenhouse effect gases while providing a whole new set of chemical building blocks.

Previous
Jesús San José wins RSC Poster Award
Next
Presenting SOMMa, a platform to promote excellent science
This website uses cookies to facilitate user navigation. You can get more information or change the settings of your browser by clicking here. ACEPTAR