ICIQ’s first spin-off, Orchestra Scientific, has won the Enagás “Ingenia Energy Challenge” external award, aimed at boosting pioneering projects in energetic transition. The startup’s project proposes to optimise the CO2 capture process through the development of highly selective membranes that allow CO2 to be separated from other gases. After a real-environment pilot, Orchestra is improving its membranes to help to to decarbonise industries with high emissions and reduce the cost of upgraded biogas.

The prize consists of 5 000 € and backing in the completion of a pilot in 2021. “We are very thankful to Enagás and Enagás Emprende for their commitment to innovation and entrepreneurship. Since Orchestra was founded, they have always shown interest in our strategy and have been in contact over the years,” says Cristina Saénz de Pipaón, Orchestra Scientific’s CEO. “It was a great initiative to open the challenge to external candidates. The proposals submitted showed great levels of innovation, showing that the change our society needs must come from technology transfer and open innovation,” explains Saénz de Pipaón. 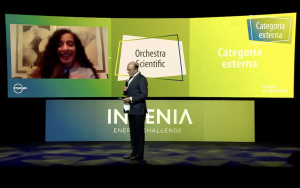 This was the first year the challenge was open to proposals outside the company and a total of 116 proposals were submitted to the two categories: internal or external. Two other external projects were awarded a second prize: Solatom, selling solar boilers to be used in industrial processes; and Secure H2 underground storage, which simulates biological behaviour in underground storage facilities. A second ICIQ project was submitted to the challenge by the Lloret-Fillol group: CATSOL-AEM, focused on developing and commercialising catalytic solutions related to the development of Anion Exchange Membrane technologies for sustainable production of hydrogen. Although still in its initial stages, CATSOL-AEM was selected for the final round of the Challenge.

The Internal category of the award includes all the projects received by Enagás professionals. The winning team was ADDENA, a proposal that promotes the development of a bioGNL production market from biogas with B-Hydrogen, which aims to produce H2 from beer production waste, obtaining a second place.

Enagás is Spain’s leading natural gas transmission company and Technical Manager of the national gas system. The Ingenia Energy Challenge Awards Jury is made up of Enagás executives representing all areas of the company and external professionals who are experts in entrepreneurship and innovation. The CEO of Enagás, Marcelino Oreja, highlighted that “corporate entrepreneurship is an essential support for companies like Enagás to move towards a just energy transition in an agile and efficient way. The proposals that have been presented in the Ingenia Energy Challenge awards are the spearhead of innovation for the energy transition that we promote at Enagás.” Fernando Impuesto, CEO of Enagás Emprende, commented that “this first open call for the Ingenia Energy Challenge awards is very special for us. It is another step in our programme, created in 2015, and the opportunity to access a lot of talent, both inside and outside Enagás, capable of generating new growth opportunities for the company and the sector.”

Previous
Kleij and Pérez-Temprano recognised by the RSEQ
Next
Congratulations Doctor Lai!
This website uses cookies to facilitate user navigation. You can get more information or change the settings of your browser by clicking here. ACEPTAR