We asked Prof. Javier de Mendoza, Professor Emeritus at ICIQ, to write something about the awardees, all three well known to him, and the research achievements for which they have been awarded. What follows is what Prof. de Mendoza has kindly sent us. 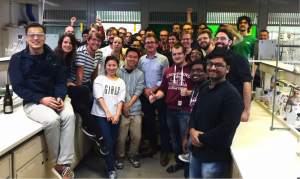 Ben Feringa and his group celebrating the Nobel Price (from the Nobel Foundation official page). The green-painted hood at the back was the one Paula de Mendoza (a former ICIQ PhD student at Echavarren’s group) employed to work on light-sensitive photoswitches.

I had to wait 20 years but, as expected, the Nobel Prize in Chemistry was awarded this year to Ben Feringa together with Jean-Pierre Sauvage and Fraser Stoddart, who will split the prize equally, for their work in developing molecular machines.

Our field, supramolecular chemistry, was already awarded in 1987, 29 years ago, when Charles Pedersen, Jean-Marie Lehn and Donald Cram obtained the Nobel Prize for their discovery of crown ethers, cryptands and spherands, respectively. So the field becomes honored every 30 years in sets of three winners, a laureate per decade as a mean, not too bad!

In those years, most effort in supramolecular chemistry was devoted to molecular recognition, so many designs were based on the principles of shape, size or binding sites complementarity between interacting partners. A myriad of new shapes and the corresponding nick names emerged, such as calixarenes, cavitands, velcrands, tennis balls, helicates, catenands, knots, pretzels, zippers, etc. From the perspective of colleagues working in other fields of chemistry, in our seek for molecular control most of us looked about to get out of control! Of course, the goal was neither the design nor the beauty of the molecule, but the function, the property. And this is probably the most relevant achievement highlighted in the current award.

As pointed out by the Nobel Committee, the trio of 2016 winners designed and built molecules that can be controlled to accomplish a task once they’re supplied with energy, in more popular words, they designed and assembled the first examples of molecular motors. But let us concentrate briefly on some definitions, as the words are important in this matter, and we have to fix our ideas when we talk about motors, machines, devices, work or energy-dependent molecular tasks. According to the Cambridge dictionary, a motor is a device that changes electricity or fuel into movement and makes a machine work. What is then a device (a fashionable word indeed!)? It is simply an object or machine that has been invented for a particular purpose. Mmmm… somewhat redundant definitions. Perhaps we can get a more precise idea if we look for machine: a piece or equipment with several moving parts that uses power to do a particular type of work, which itself is defined in physics as the result of force multiplied by distance moved. In other words, we come finally to direction as the key term in this jungle. 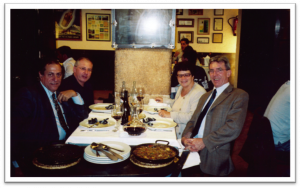 Sauvage was recognized to be the first to create a catenane, two ring-shaped molecules linked together as in a chain. For that purpose, he employed a tetrahedral copper(I) complex of 1,10-phenathroline. The heterocycle carried two long chains at flanking 2,9-positions, whose ends were linked by a chemical reaction (initially a classical SN2 reaction, more recently an acetylene-acetylene coupling). Removal of the metal yielded the desired catenane. The whole game was an elegant exercise of topology, which is not a synonym of geometry. Further developments afforded more sophisticated chained structures or  even a trifold knot. Most remarkably, Jean-Pierre Sauvage was a co-author, with Bernard Dietrich and Jean-Marie Lehn of the 1969 seminal paper on cryptands which paved the way for Lehn’s Prize in 1987. This was published in… Tetrahedron Letters (note for bibliometric maniacs: impact factor 2.38). 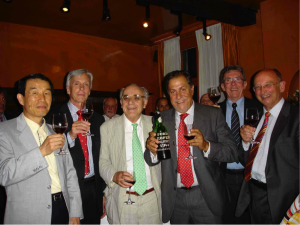 Instead of metal coordination as a template, Fraser Stoddart’s approach to catenands was based on aromatic charge-transfer interactions, such as those taking place between electron-rich catechol derivatives (the so-called big-red components/macrocyles) and electron-poor 4,4’-bipyridinium (paraquat) dications (little-blue components/cyclophanes in Fraser’s cartoons). Rotaxanes (1991), molecular rings threaded onto molecular axles, were based on similar chemical principles, which Stoddart used to develop molecular shuttles, muscles, and computer chips, among many other chemical architectures. Most relevant is the control of molecular movements achieved in these systems by external inputs, often by rather simple ways, such as acid/base changes.

As pointed out earlier, for a rotary motor it is essential to control the direction of the movement. Ben Feringa is recognized for building the first unidirectional molecular motor (1999), based not on single bonds, but on isomerizable double bonds. Using overcrowded chiral alkenes, it was possible to obtain unidirectional rotation by a subtle combination of light irradiation and thermal relaxation cycles. Over the years, improved designs allowed dramatic increases of rotation frequency (up to 12 MHz in 2014).

I don’t intend to give too many details about the achievements of our three 2016 Nobel laureates, these are a few words from a personal perspective. The interested reader is advised to visit the Nobel Prize web site for an excellent and friendly article on the topic.

Obviously, a Nobel Prize is the result of the work and efforts of many more people than just the awardees. Not only through the contribution of their present and past co-workers, but also from many colleagues (collaborators and competitors) around the world, and everyone can easily find names of scientists whose names are missing from the honorary board. For the Committee it is obviously impossible to recognize the merits of all the members of a full orchestra, all necessary to produce a beautiful sound, so they are forced to stay at the chamber music level (soloists, duos and increasingly trios, but not yet quartets!). Let me, however, share with you my missing soloist, Vincenzo Balzani (Univ. of Bologna). He contributed leading discoveries in photochemistry, photophysics, supramolecular chemistry, electron transfer reactions, molecular-level devices and (of course) machines. More importantly, besides his scientific activities, he claims that scientists have a great responsibility coming from knowledge, and must educate citizens and help decision makers to find solutions to mankind’s problems, particularly the energy problem. An attitude fully shared by the new trio of 2016 Nobel Prize winners. Doubtless a Cum Laude celebration.

Previous
PHOTOTRAIN: A new ITN project
Next
Miquel A. Pericàs, new director of the Barcelona Institute of Science and Technology
This website uses cookies to facilitate user navigation. You can get more information or change the settings of your browser by clicking here. ACEPTAR