Take a quick dive into the recent publications of the ICIQ groups:

In the Angewandte Chemie International Edition paper “Hydrolysis of Aliphatic Bis‐isonitriles in the Presence of a Polar Super Aryl‐Extended Calix[4]pyrrole Container,” the Ballester group reported the application of a water-soluble super aryl-extended calix[4]pyrrole in the acid-catalyzed hydrolysis of symmetric bis-isonitriles. The presence of the polar container in the reaction mixture induced a decrease of the reaction rates and a yield enhancement for the non-symmetric product: the mono-formamide. The analysis of the kinetic data indicated that the observed modifications in reaction rates and selectivity are related to the formation of highly stable inclusion complexes of the reacting substrates with the receptor. The scientists concluded that the water-soluble super aryl-extended calix[4]pyrrole acted as both a sequestering and protecting group in the mono-functionalization reaction.

Polyoxometalate chemistry has largely succeeded in discovering new compounds and novel applications, but understanding and controlling aqueous speciation of metal oxides is still a challenge both experimental and computationally. In the paper “Unlocking Phase Diagrams for Molybdenum and Tungsten Nanoclusters and Prediction of their Formation Constants” published in The Journal of Physical Chemistry A, researchers from the Bo group present a computational method, called POMSimulator, able to predict speciation phase diagrams (Conc. vs pH) for multispecies chemical equilibria in solution – which they have applied to molybdenum and tungsten isopolyoxoanions (IPAs).

The Echavarren group present in their Angewandte Chemie International Edition paper “Enantioselective Alkoxycyclization of 1,6-Enynes with Gold(I)-Cavitands: Total Synthesis of Mafaicheenamine C,” how to enhance the selectivity of metal catalysts by creating supramolecular entities that mimic the activity of enzymes. This way, the group has designed a new family of achiral and chiral gold(I)-cavitand complexes, easily synthesized in either enantiomeric form in a modular manner from resorcin-[4]arenes and commercially available chiral secondary amines. To demonstrate the potential of the new catalysts, the researchers completed the first total synthesis of (+)-mafaicheenamine C as well as its non-natural enantiomer.

Researchers from the Galán-Mascarós, Maseras and Pérez-Temprano groups set out to understand how Cp*CoIII catalysed C-H functionalisation, specifically the mechanistic process leading to the C-S bond formation through reductive elimination. In the collaborative paper “Redefining the Mechanistic Scenario of Carbon–Sulfur Nucleophilic Coupling via High‐Valent Cp*Co(IV) Species” published in Angewandte Chemie International Edition, the scientists have brought forth a strategy that uncovers how Cp*CoIV species are the real intermediates in Cp*Co-mediated C-S nucleophilic couplings. 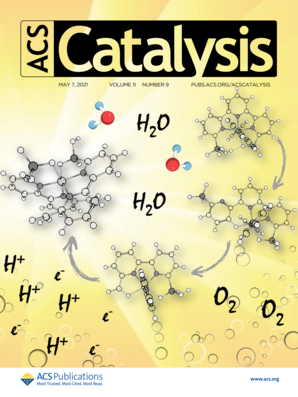 Scientists from the Llobet group report, in the ACS Catalysis paper “Fate of the Molecular Ru–Phosphonate Water Oxidation Catalyst under Turnover Conditions,” the behaviour of a recently reported polypyridyl phosphonate−phenoxo Ru-based water oxidation catalyst under turnover conditions operating at different pHs and applied potentials. The work highlights the need to carry out detailed analysis on the performance of molecular WOC under turnover conditions not only to decipher the nature of the active species but also for its successful implementation into a technologically useful PEC for the generation of solar fuels.

Despite extensive efforts to elucidate its mechanism, WOR is not fully understood, prompting an ongoing debate with several proposals concerning the formation mechanism of the oxygen-oxygen bond. Now, researchers from the Lloret-Fillol group have used labelling studies to monitor the intermediates formed both before and after the rate-determining step of WOR and have isolated and fully characterised an elusive intermediate generated after the oxygen-oxygen bond formation event. In their Nature Chemistry paper “Isolation of a Ru(iv) side-on peroxo intermediate in the water oxidation reaction,” the scientists provide, for the first time, direct evidence of the formation of the oxygen-oxygen bond by water nucleophilic attack from the metal-oxo.

In the WIREs Computational Molecular Science review “Dimensionality reduction of complex reaction networks in heterogeneous catalysis: From linear-scaling relationships to statistical learning techniques,” researchers from the López group delve into the key implementation aspects regarding automation, structure generation and data extraction and storage when using computational models based on Density Functional Theory to estimate the information needed in heterogeneous catalysis mechanistic studies. The scientists also present new tools for the identification of descriptors, opening up new avenues to more advanced models.

Scientists from the Martin group have constructed a new platform to access sp3 bis-organometallics. The new catalytic route has been published in the Angewandte Chemie International Edition paper “sp3 Bis‐Organometallic Reagents via Catalytic 1,1‐Difunctionalization of Unactivated Olefins.” The researchers have developed a highly modular and site-selective 1,1-difunctionalisation of unactivated olefins to obtain bis-organometallic reagents. The reaction is characterized by its broad scope, mild conditions and exquisite chemo- & regioselectivity, thus offering an alternative blueprint for preparing densely functionalized, yet synthetically versatile, 1,2-bisorganometallics from simple and readily accessible precursors.

Finding new uses for old tools is a win in life – and chemistry. In the Nature Chemistry paper “Catalytic asymmetric C–C cross-couplings enabled by photoexcitation,” the Melchiorre group demonstrate how a catalyst traditionally used in allylic substitutions can switch reactivity under blue visible light and perform enantioselective cross-couplings. The findings may serve as a blueprint to further expand the established potential of asymmetric transition-metal catalysis using photoexcitation, as well as unravelling novel mechanistic pathways unreachable under traditional thermal conditions.

The roadblock for the industrialisation of perovskite solar cells (PSCs) technology is their stability. In the Energy & Environmental Science paper “Understanding the perovskite/self-assembled selective contact interface for ultra-stable and highly efficient p–i–n perovskite solar cells,” researchers from the Palomares group demonstrate the importance of molecule design on device performance and long-term stability. The scientists demonstrate that using self-assembled monolayers (SAMs) as a charge selective layer results in higher stability of the device, unveiling a possibility for further promoting the performance and stability of PSCs while providing valuable insight to design charge selective contacts for PSCs.

The Pericàs group have developed a practical methodology for performing catalytic “wolf-and-lamb”-type reactions involving mutually deactivating catalysts in continuous flow. Their ACS Catalysis paper “Assessing the Role of Site Isolation and Compartmentalization in Packed-Bed Flow Reactors for Processes Involving Wolf-and-Lamb Scenarios” shows (for ten examples of organic synthesis in flow) how the key factor for wolf-and-lamb catalytic processes is site isolation – achieved through a simple physical mixture of mesoporous silica-based acid and base catalysts. The new methodology is very convenient when compared to traditional methods where a polymer has the incompatible catalytic units physically separated to avoid incompatibilities, which is quite complex to synthetise. This work paves the way toward the development of tandem wolf-and-lamb processes in flow in a simple and affordable manner.

Previous
Prof. Melchiorre receives RSC’s Pedler Award
Next
ICIQ research highlighted on Synthesis Workshop video podcast
This website uses cookies to facilitate user navigation. You can get more information or change the settings of your browser by clicking here. ACEPTAR