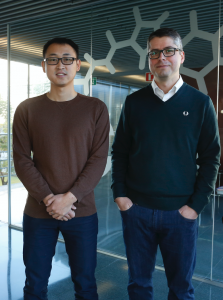 In the 11th edition of the SusChem-JIQ awards, a jury of experts representing all areas of chemistry in Spain has awarded two ICIQers for their work.

Dr. Zhaofeng Wang, a former postdoc in Dr. Marcos G. Suero’s group, has received the SusChem-JIQ award in the Postdoc category for the best 2018 scientific publication in ​​chemistry. The jury, chaired by Prof. Mar Gómez, on behalf of the Royal Spanish Society of Chemistry, decided to unanimously recognise Dr. Wang for being co-author of the paper “Generating carbyne equivalents with photoredox catalysis” published in Nature. The paper describes a new methodology that allows the scientists to create chiral centres adding three different fragments to a carbyne by using visible light and photocatalysts. Read the ICIQ news piece on the paper. 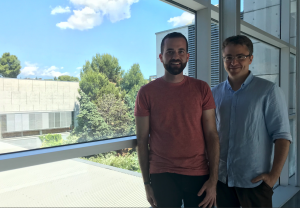 SusChem-JIQ has also awarded Andreu Tortajada Navarro, predoc in Prof. Ruben Martin’s group for his work. The jury, chaired by Prof. Mar Gómez, on behalf of the Royal Spanish Society of Chemistry, decided to unanimously recognise Tortajada Navarro for being co-author of the paper “Ni-Catalyzed Site-Selective Dicarboxylation of 1,3-Dienes with CO2” published in the Journal of the American Chemical Society. The paper describes how the scientists have developed a mild, selective, nickel-catalyzed reaction protocol which can be used to insert two molecules of CO2 into two C=C double bonds.

Since 2009, SusChem-España, the Spanish Chemistry Technological Platform, in collaboration with the Spanish Royal Society of Chemistry’s Young Chemistry Researchers section, sponsors the SusChem-JIQ awards. The prizes aim at recognising the important work of young and promising chemists. With an economic reward of 2.000 € each, the awards are distributed in four categories: Futura, Innova, Predoc y Postdoc.

Previous
From carbon dioxide and biomass to polymers
Next
Perovskite solar cells are HOT!
This website uses cookies to facilitate user navigation. You can get more information or change the settings of your browser by clicking here. ACEPTAR