Negishi cross-coupling reactions have been widely used to form C-C bonds since the 1970s and are often perceived as the result of two metals (i.e zinc and palladium/nickel) working in synergy. But like all relationships, there is more under the surface than what we first expected. PhD student Craig Day and Dr. Rosie Somerville from the Martin group at ICIQ have delved into the Negishi cross-coupling of aryl esters using nickel catalysis to understand how this reaction works at the molecular level and how to improve it. The results have been published in Nature Catalysis.

Compared to palladium, nickel has the advantage of being readily available transition metal, with unique chemical properties that allow for the activation of challenging bonds otherwise inaccessible by palladium cross-coupling endeavours. These characteristics make it attractive for the development of synthetic applications, and over the last decades, it has proven to be a rapid and reliable way to build up molecular complexity from simple and available precursors. To the researchers this Nature Catalysis paper provides a rationalisation of how and why nickel-catalysed cross-coupling reactions work at a level that wasn’t attempted before. “Our work provides an unprecedented look at the speciation of Ni catalysts in Negishi cross-coupling reactions, and have unraveled a counterintuitive dichotomy exerted by Zn(II) salts in catalytic activity. Given the important role exerted by Zn in a myriad of Ni-catalysed reactions, one might expect that these transformations obey similar principles to those described in our study, thus offering new vistas for designing new catalytic systems or outperform existing ones” explains Prof. Ruben Martin, ICIQ group leader and ICREA professor. 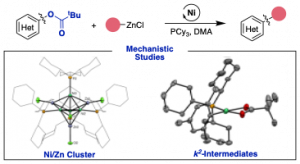 Using an organometallic approach to investigate and identify the nickel species involved in the catalytic cycle, the team has been able to isolate the individual intermediates and show how they are all connected in the catalytic cycle. This led them to contemplate there were other meaningful, although undesired, interactions happening between the two metals nickel and zinc. “The interaction between the two metals is required for the transformation, but it can also be deleterious in other ways. Chemists need to be aware of these problems to design better catalytic reactions,” quips Craig S. Day, PhD student in the group of Prof. Ruben Martín and first author of the paper.

The scientists have discovered there are three undesired off-cycle pathways happening: ligand scavenging, reduction-oxidation pathways and the formation of unorthodox Ni/Zn clusters. Although speculated for a long time, this work offers the first direct evidence of Ni-Zn interactions. In addition, the research shows the importance of the nature of the solvent used in the reaction as it plays a role in regulating the interactions of the catalyst and zinc species. In fact, looking further into the role of zinc in these systems, the researchers believe there is still more to be determined about how the properties of ligands affect the interactions among the catalytic couple.

Tying together all the concepts, the work easily extrapolates to other cross-couplings, opening up new avenues of research to explore the inner workings of different systems. “We’ve provided a model for how similar reactions should occur. Both in understanding how aryl-oxygen electrophiles can be functionalised and lessons in Ni-catalysed Negishi cross-coupling reactions” concludes Day.